The Terrifying Ascent of Mt. Fatuleu

Mount Fatuleu is not the biggest or most impressive mountain I’ve ever climbed, but it is definitely the steepest and probably the most dangerous.  The views from the top are spectacular. My mate Tim and I set off on the 1.5 hours motorbike ride (if only it actually took us 1.5 hours…) from Kupang on Indonesian Independence Day, not realising the adventure that lay ahead.

We left Kupang early on a balmy morning and headed out of town, first east along the main two-lane highway, which was busy with morning traffic.  Maybe we’re just impatient, but we found ourselves constantly trying to overtake slow-moving trucks. Then, as we began to climb into the highlands, onto smaller roads with stunning vistas all the way to the Savu Sea.  The sky was beautifully blue and the myriad rural villages we passed were teeming with friendly locals. Children waved at us as we rode and shouted, “Hey mister!”, every time we happened to glance in their direction. 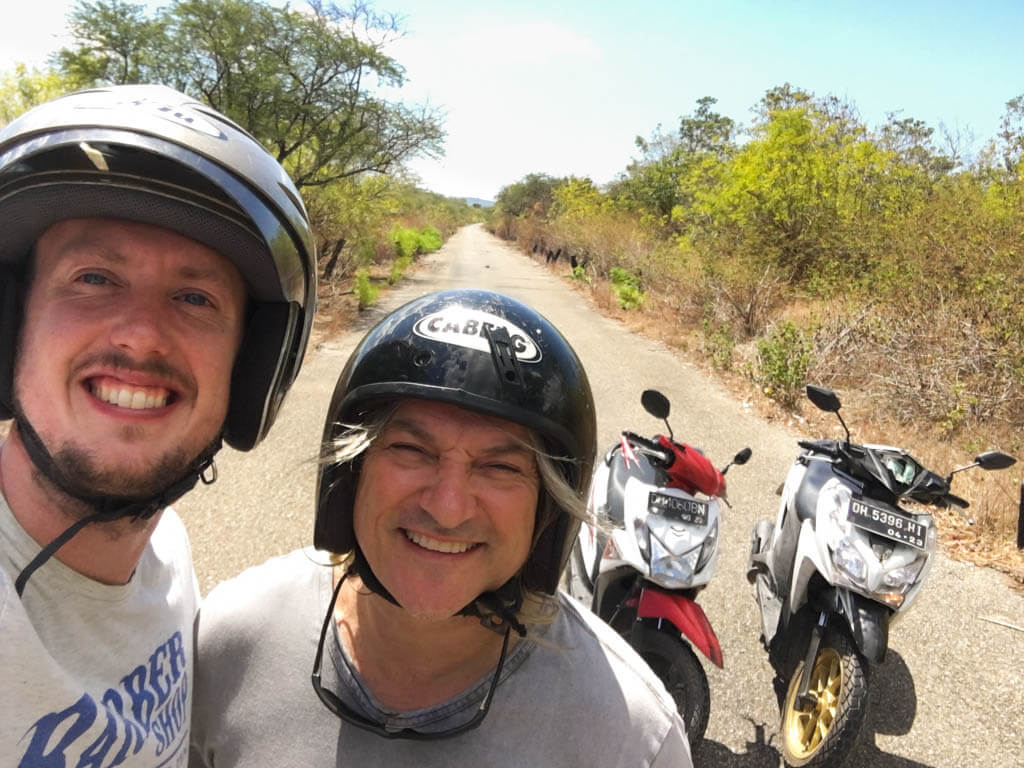 Looking at Google Maps, the journey should have been simple – just follow the road that goes past the hostel until it becomes the main road east, and then turn off up to the mountains.  Then Google tried to improve upon this by finding the absolute shortest route possible. This turned out to be a dirt track that was almost impassable and, when we stopped to ask some locals they all (yes, we asked several) told us to loop back to the main road and take another route.  This eventually made our 1.5 hours journey about 3 hours, but at least the scenery was beautiful and I enjoyed riding around the potholes on the dirt roads – it felt like navigating an obstacle course. It turned out to be good practice for our trip to Timor Leste the following week too, where the roads were far worse.

Once back on the main road, Tim spotted a guy with a cart selling traditional Indonesian ice cream.  The ice cream was not bad, although it had a slightly strange taste that I couldn’t place – I think it was supposed to be chocolate flavoured.  However, what really made the stop worthwhile was the friendly seller, who happily posed with his cart for a photo op. 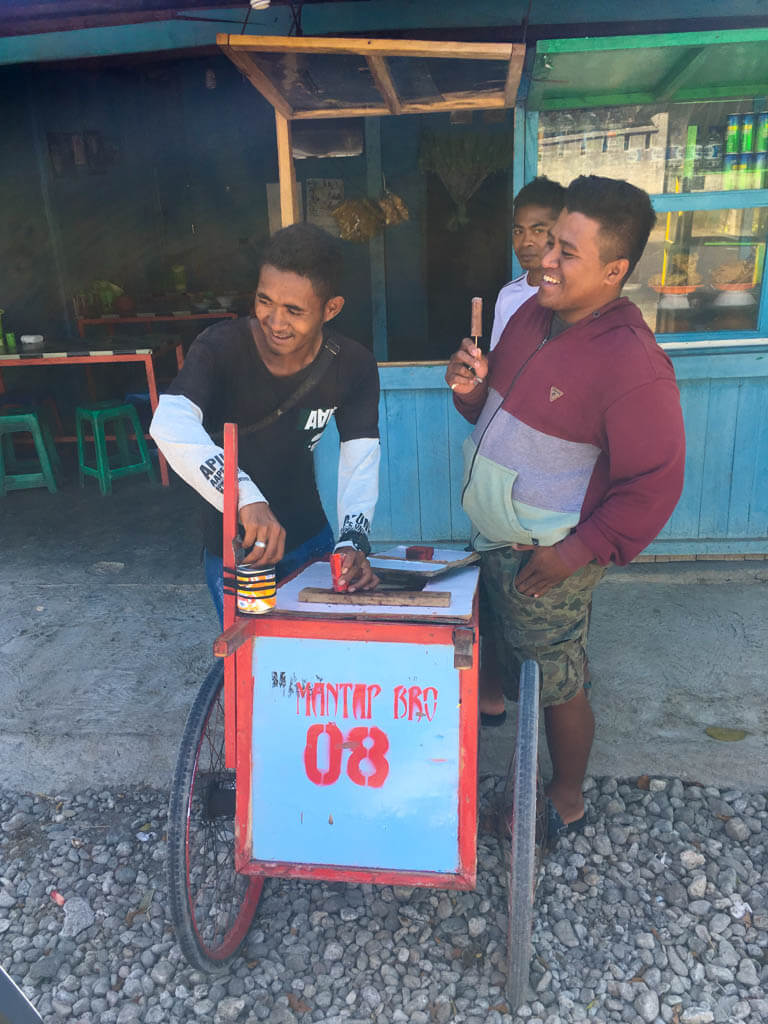 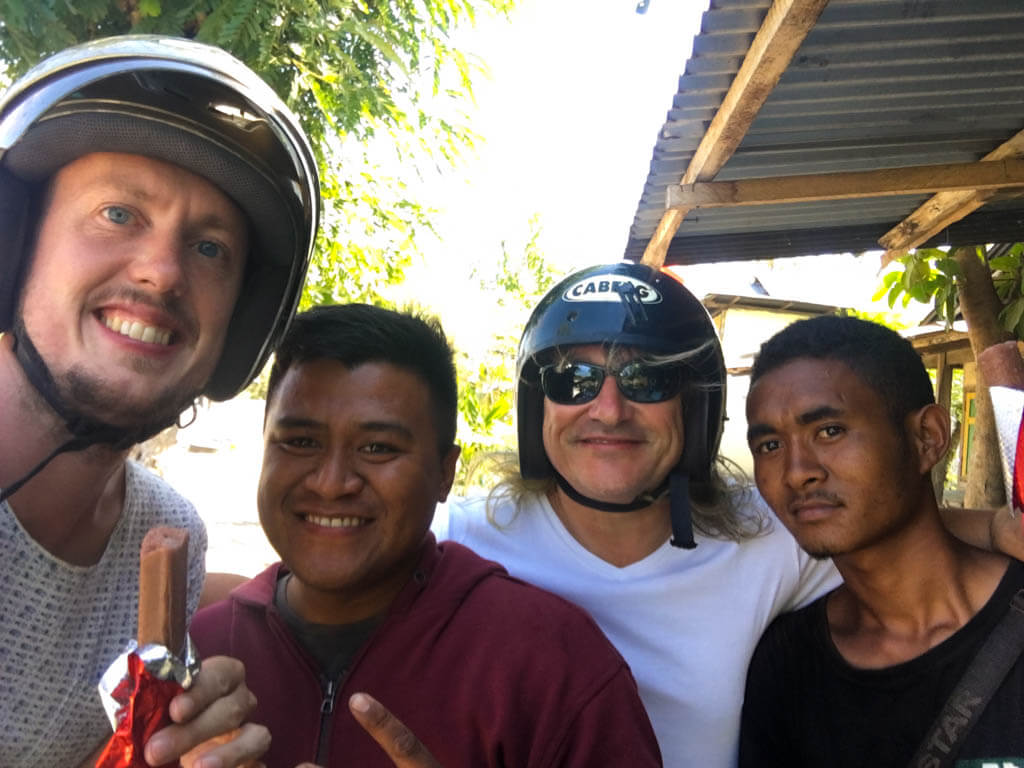 With such smiley people, who cares about getting lost

When we finally found the right road to the mountain, it was really smooth, climbing through beautiful mountain scenery dotted with quaint little villages and the occasional roadside vendor selling fuel.  We arrived at the parking area after about 40 minutes and paid 5k rupiah (€0.32/$0.36) each for parking. A sign said that the climb would take up to three hours. But we we’re young (ish) and fit, so we were sure we could beat that. 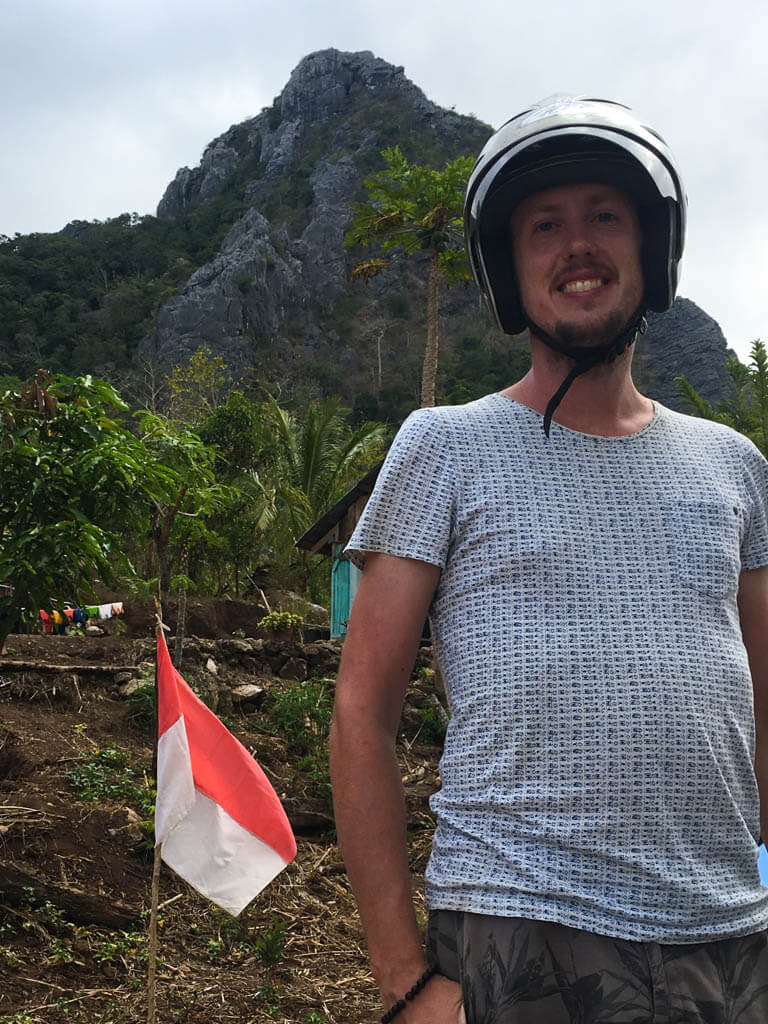 Time for quick selfie with Mt. Fatuleu on the drive up. Photo: Timothy Hawksworth. 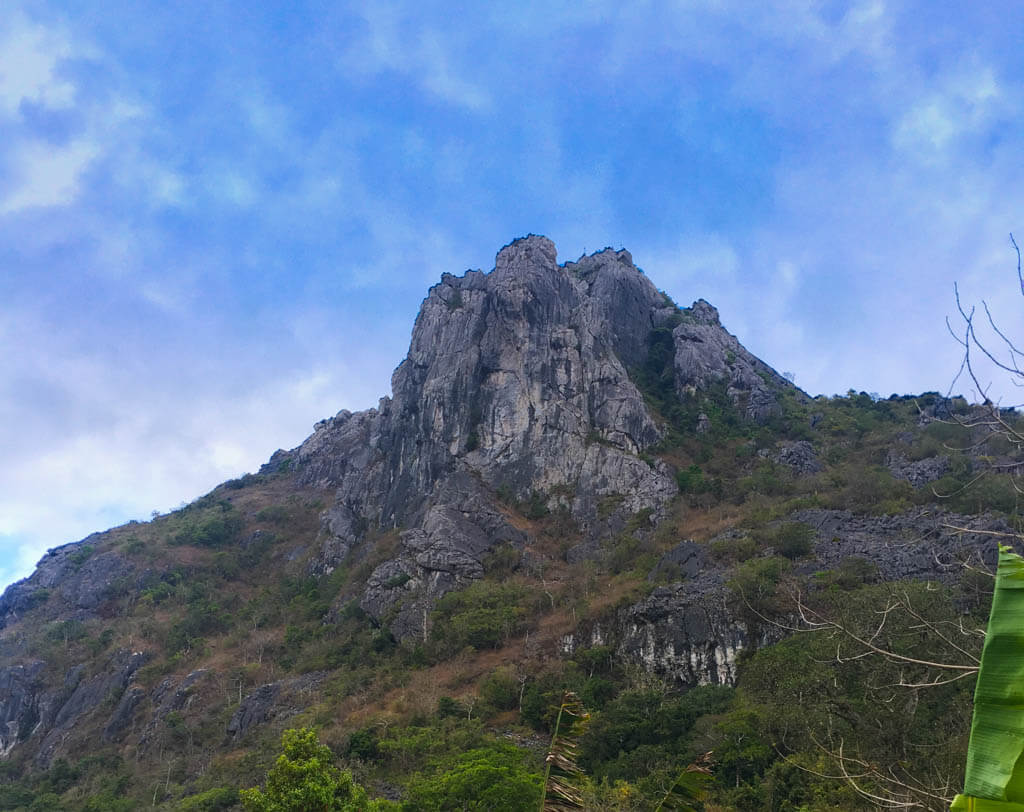 Don’t let its beauty deceive you, this mountain is not a pushover

The first section of path was paved with steps that gradually became steeper as we progressed, but nothing too strenuous.  However, after about half an hour, the paving abruptly ended at a steep incline covered in boulders. It looked more like a landslide than a path!  So this is where the real climb begins, we thought (how wrong we were). By this stage, we’d gathered a cheerful entourage of young West Timorese, who were intrigued by the two intrepid foreigners climbing their favorite mountain.  Some spoke a bit of English (at least between giggles) and all wanted to take selfies with us. Many also knew the mountain well and were very happy to point out the easiest route through the jumble of boulders to their new foreign friends.  The rocks were volcanic and quite sharp, but many of the locals climbed barefoot. My feet would’ve been cut to ribbons, but they are so used to not wearing shoes that their feet are hardened enough not to feel it. 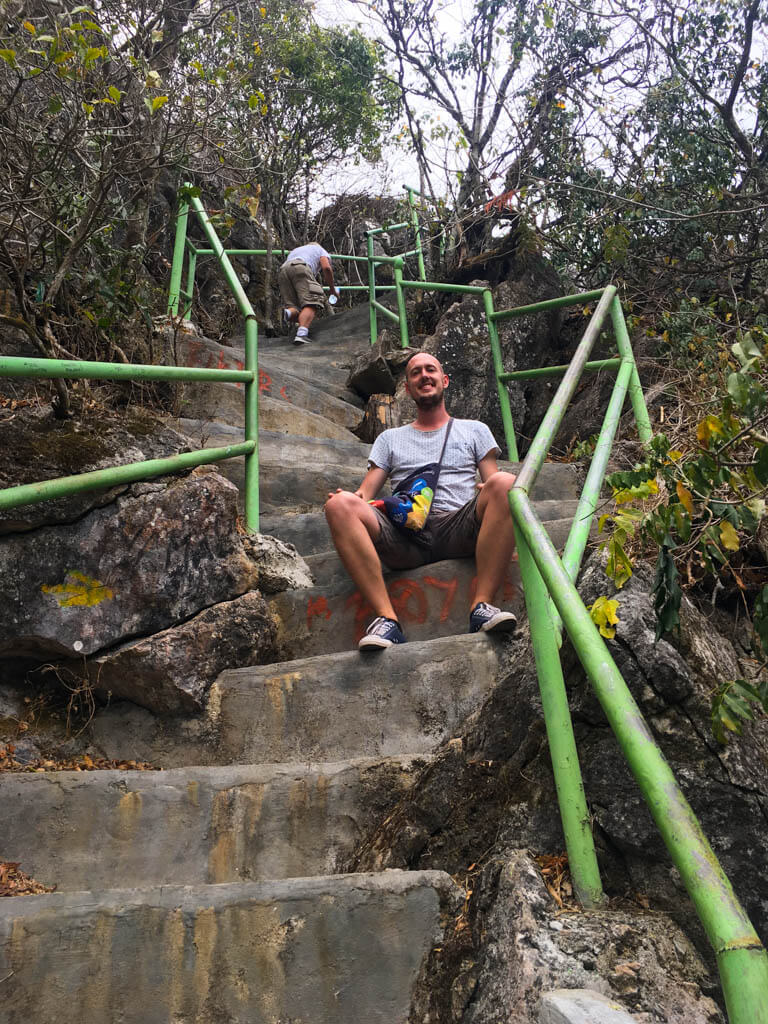 Easy peasy , there’s really nothing to this mountain climbing lark 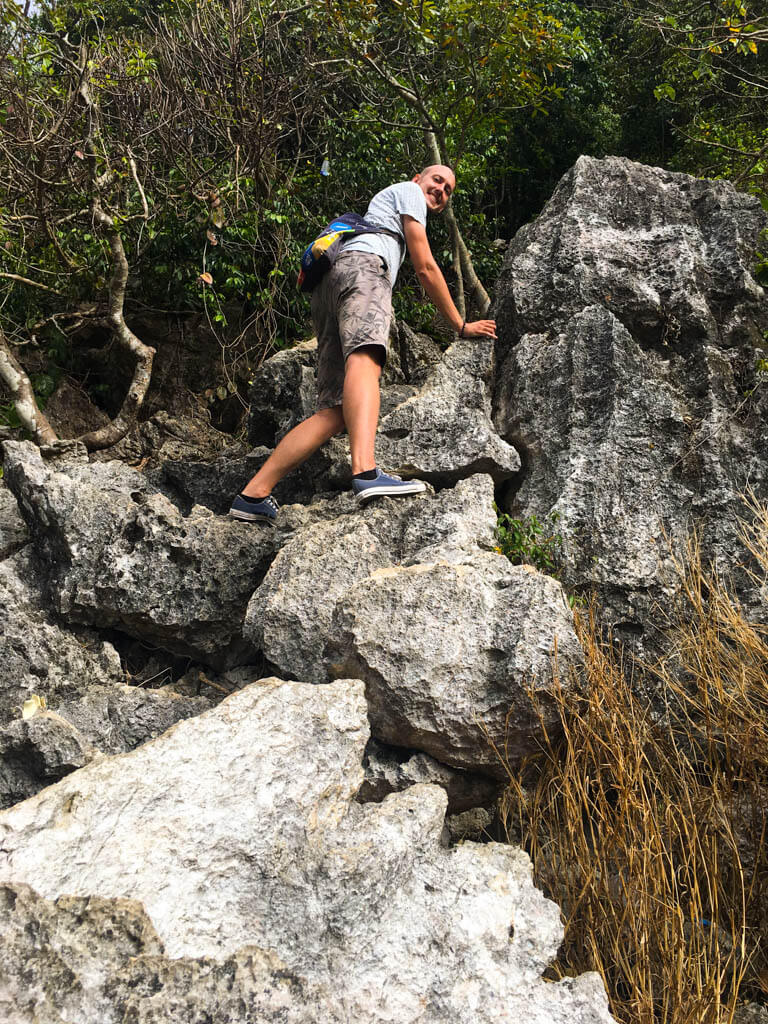 Call this a path? Oh well, paths are overrated anyway.

After another half hour or so, we scrambled up a steep section between a couple of large boulders and that’s when we realised that we hadn’t seen anything yet.  Looming before us was the final ascent, an almost-vertical section of pure rock rising above us with a steep little path zig-zagging its way between semi-vertical drops.  I had never climbed anything like it in my life. All the way up the path, and dotted all over the cliff face, were groups of energetic young Timorese chatting, laughing, giggling and in some cases waving at the two scared-looking foreigners that had suddenly appeared at the bottom. 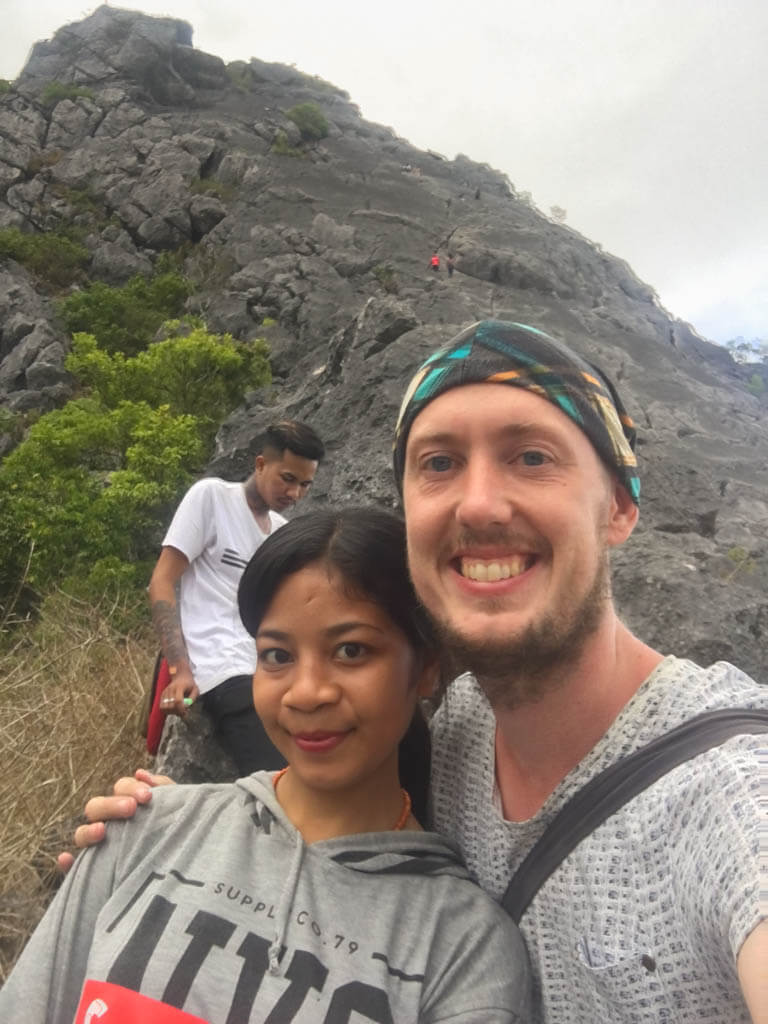 If things had gone wrong, it could’ve been the last selfie I ever took, so of course I took it with the cutest girl on the mountain 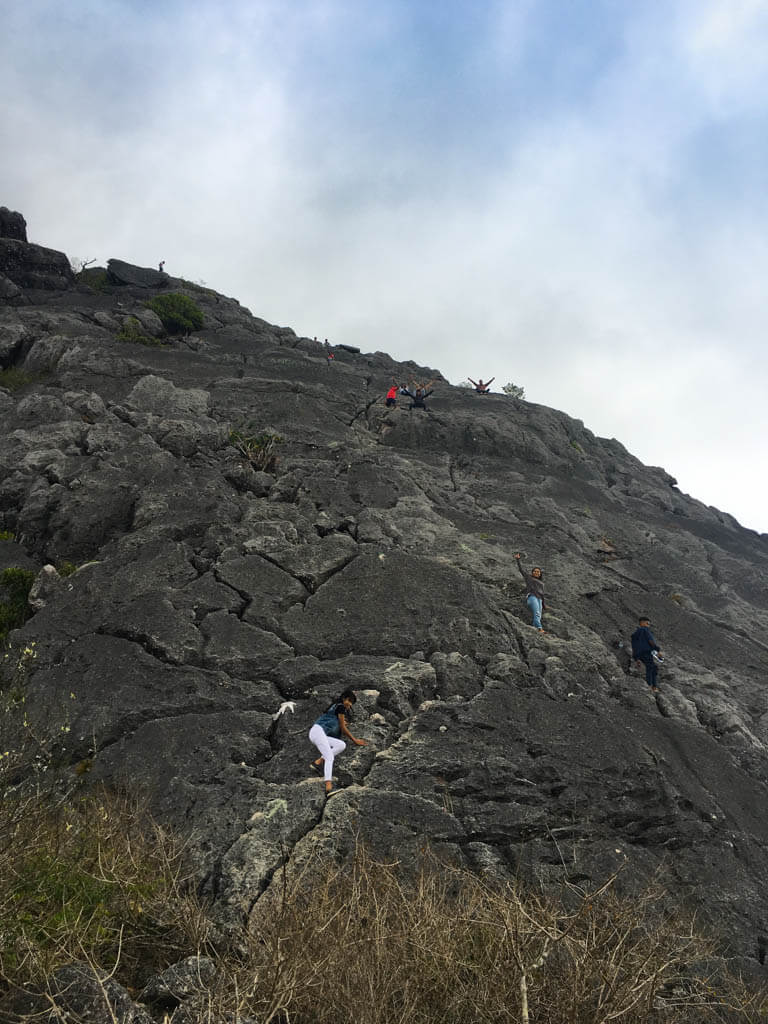 We got a bit more than we bargained for when Edwin at Lavalon hostel in Kupang recommended a nice day hike.

When I was younger, I was terrified of heights, but gradually, by pushing myself on hikes, peering over the edges of skyscrapers and walking across glass walkways while travelling, I’ve reached a stage where it’s no longer an issue.  That said, Mount Fatuleu was by far the most vertigo-inducing climb I have done. Any steeper and it would’ve been too dangerous to attempt without ropes.

And so, hiding our trepidation beneath a show of bravado as we egged each other on, Tim and I put one foot in front of the other, one hand above the other, and started to climb.  The bottom section was actually not too bad, but about a third of the way up was an almost vertical section with few hand or foot holds and a nasty drop below. The locals were excellent though.  They pointed out the best hand and foot holds, at times even helping us position our hands and feet, physically guiding us when the English language failed them, and never once losing patience as we held up everyone else on the path with our slow progress. 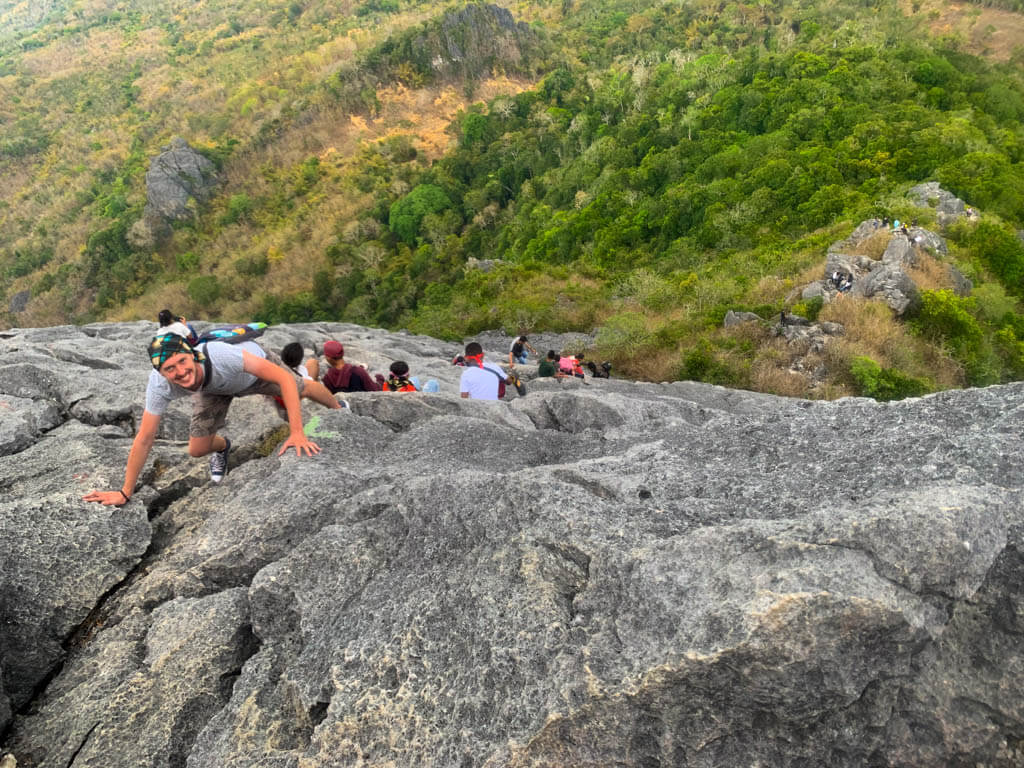 The phrase “Don’t look down” has never been more apt. Photo: Timothy Hawksworth. 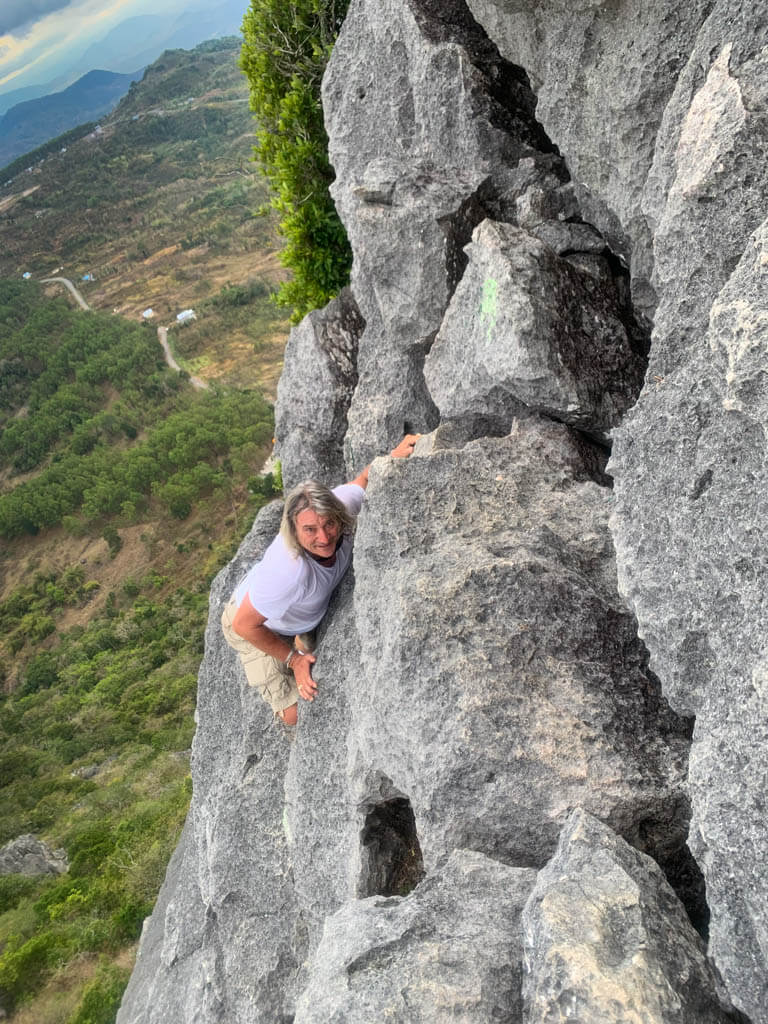 Tim keeping a stiff upper lip as we near the top

The trick in this situation is to focus on exactly where you are and look only at the next hand or foot hold, not up or down.  And the words, “don’t look down”, had never been more apt. We climbed gradually, taking a breather on the odd occasions where the path leveled out enough to relax a little and holding our breaths on the steeper sections.  Luckily, I’m quite fit and nimble, which helped a lot. Mine is a mental battle. Tim, on the other hand, is not so fit and struggled physically, but he makes up for it by having skin as thick as a rhinoceros – no mountain was going to stop him!

Eventually, we crawled over the final ridge and arrived at the top, a feeling of exhilaration enveloping us as our Tmorese friends cheered and we looked back down the path at what we had accomplished, mixed with just a slight nagging in the backs of our minds that we would soon have to descend by the same path.  There was a festival atmosphere at the summit and many of the locals had climbed with Indonesian flags to celebrate 74 years since Indonesia proclaimed its independence from the Netherlands in 1945. They all wanted the foreigners to join in on the celebration and much flag waving and selfie taking ensured. The 360° views were spectacular, and unlike in Timor Leste, where clouds roll in during the latter part of the day, visibility remained fairly good right up until sunset.  On one side were the rolling mountains and jungles of Timor, while on the other was the drier coastal region with Kupang and the Savu Sea shimmering in the distance. 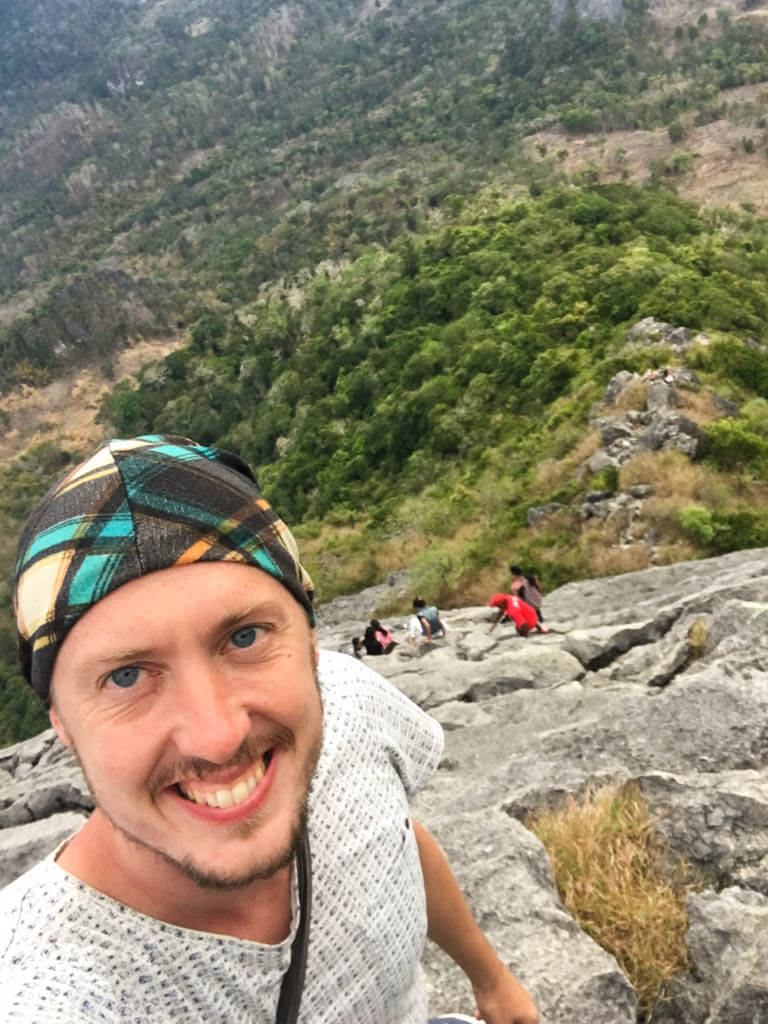 Relieved at reaching the top? Who me? I don’t know what you’re talking about! 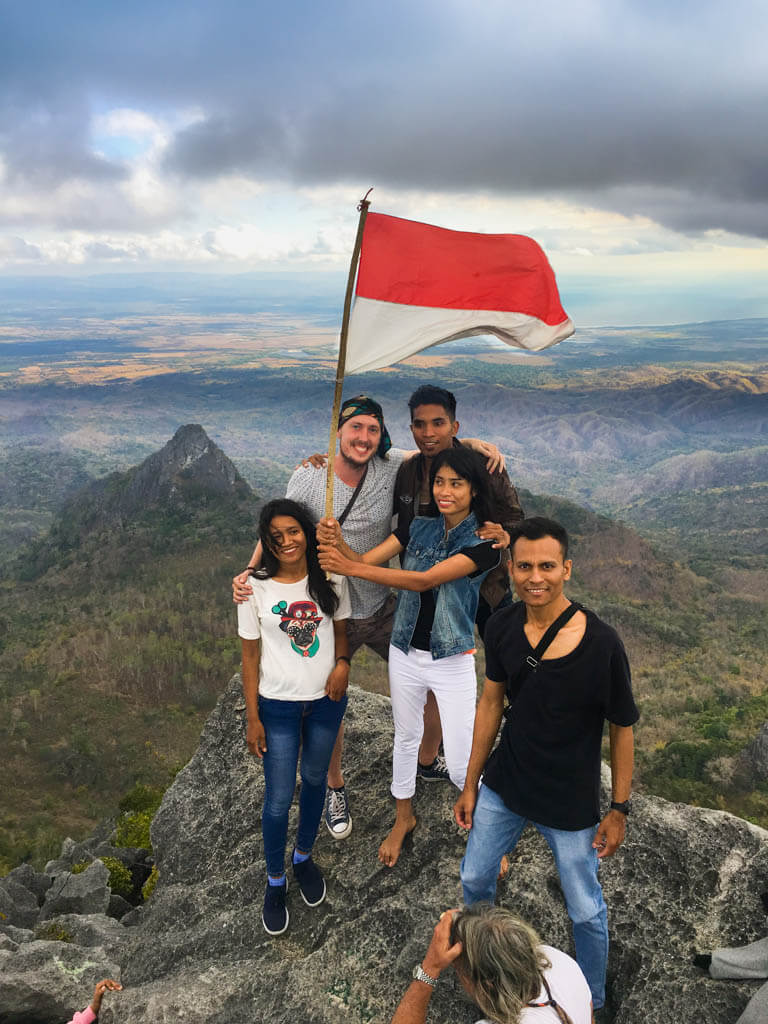 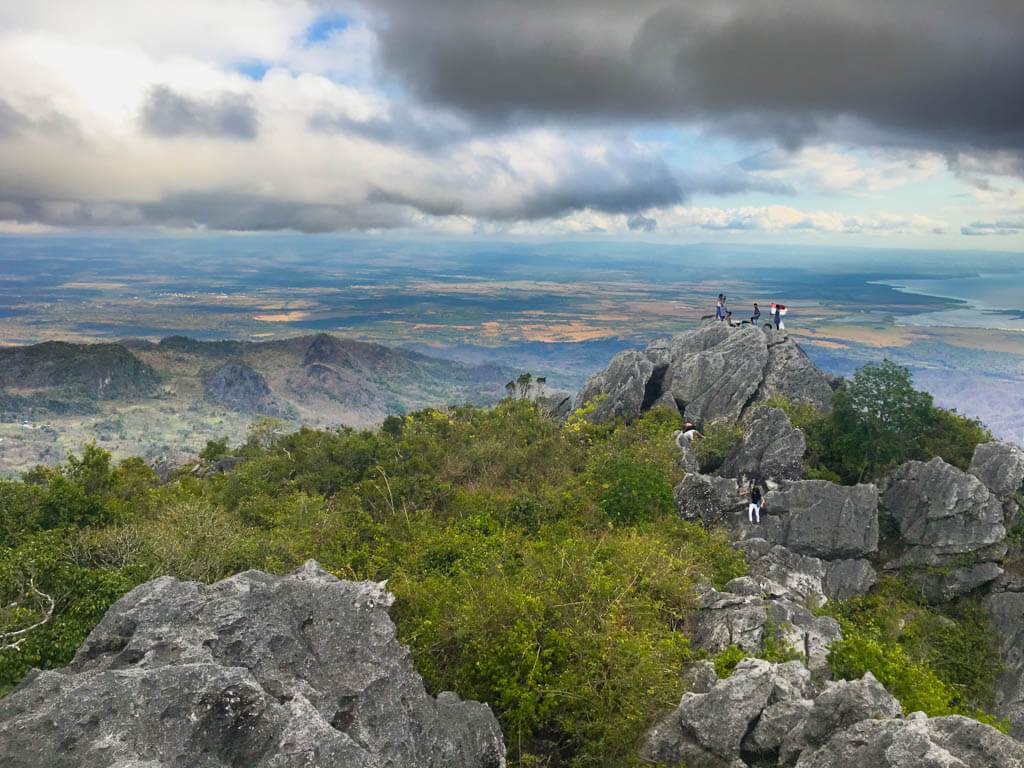 The 360° views at the summit are spectacular.

As the sun began to set, we started our descent and the local kids again put us to shame, zipping up and down the cliff face like mountain goats, while we wobbled and clung on for dear life.  The climb was fairly okay until we reached the almost vertical section, at which point it was very difficult, looking down from above, to even see hand or foot holds. Luckily, the locals guided us and even carried our bags for us.  And knowing that there is no alternative route down (bar rescue helicopter) is a really good incentive! Eventually, we wriggled our way down the difficult part and the rest of the cliff felt like child’s play in comparison. 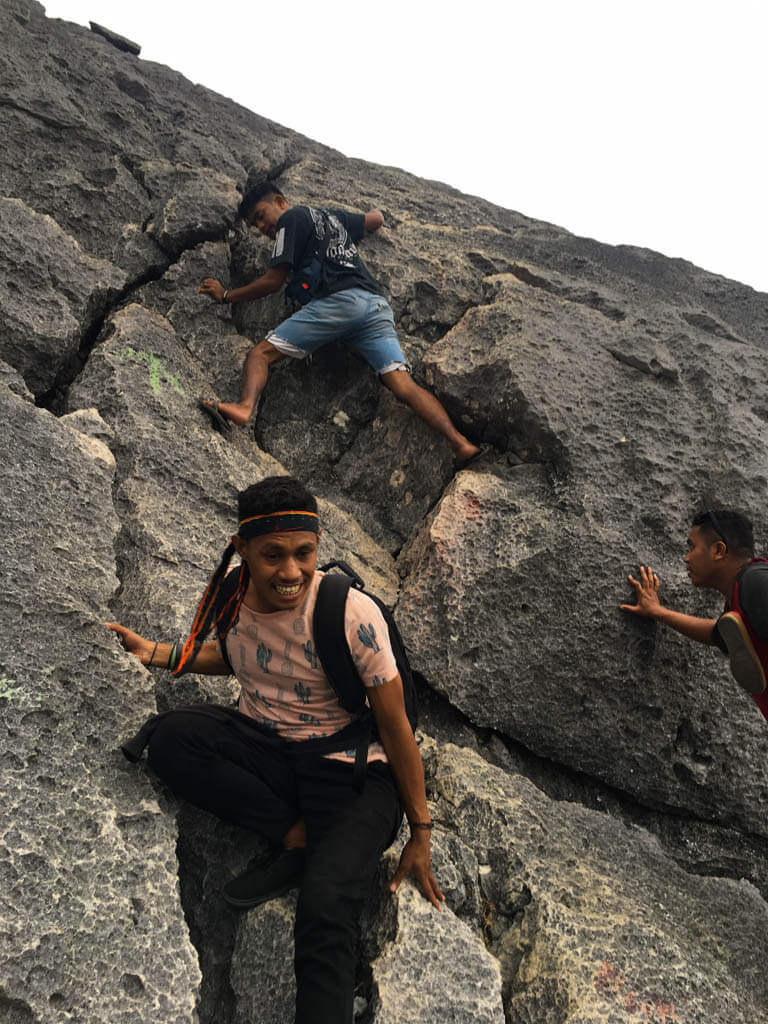 The kind locals put us to shame, even carrying our bags for us on the harder parts of the descent

We finally made it to the bottom, exhausted but triumphant, just as darkness fell.  We rested for a while and enjoyed a few soya beans boiled in their pods, which the locals gave us in the car park, while Tim made a show of taking off his shirt to wring the sweat out of it.  Then we got back on our bikes and began the journey back down to the main road and home.

Halfway back, when it was already dark, we stopped, exhausted but triumphant, at a nice little local restaurant for some chicken and rice.  I also tried some Indoensian preserved beef.  It was tasty, but as chewy as leather.  It was only when we got up to leave that Tim reached for his glasses, which he usually hangs around his neck, and realised – they weren’t there!  He’d taken them off when he removed his shirt in the Mount Fatuleu car park and forgotten to pick them up again. To make matters worse, they were an heirloom from a deceased relative.  So of course, we had no choice but to make the hour and half round trip back up to the car park. Unfortunately, we never did find the glasses. Timor is a very safe place to travel, and it’s unlikely someone actually intended to steal them, but it is poor, so they were probably taken by someone who thought that they were lost or unwanted.  We were exhausted and the mountain road was chilly at night due to the high altitude, but the extra riding added to the feeling of adventure and the drive back down under the almost-full moon was beautiful in its own way. 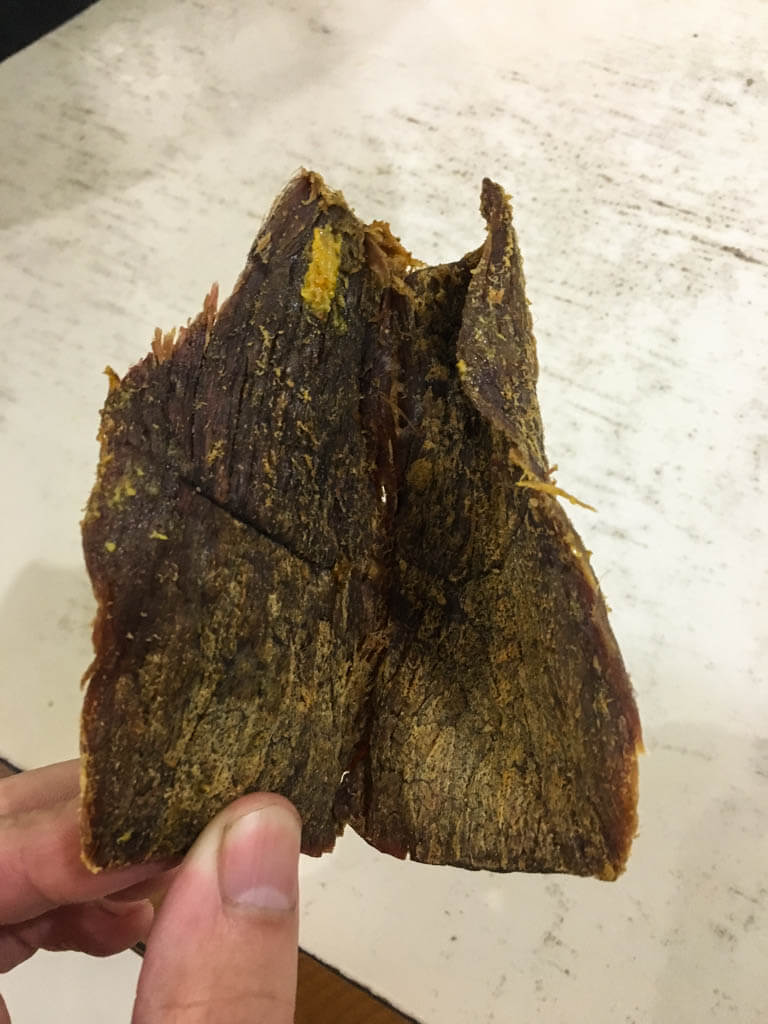 Chewier than the leather shoes I used to wear before I quit my job, but definitely tastier. 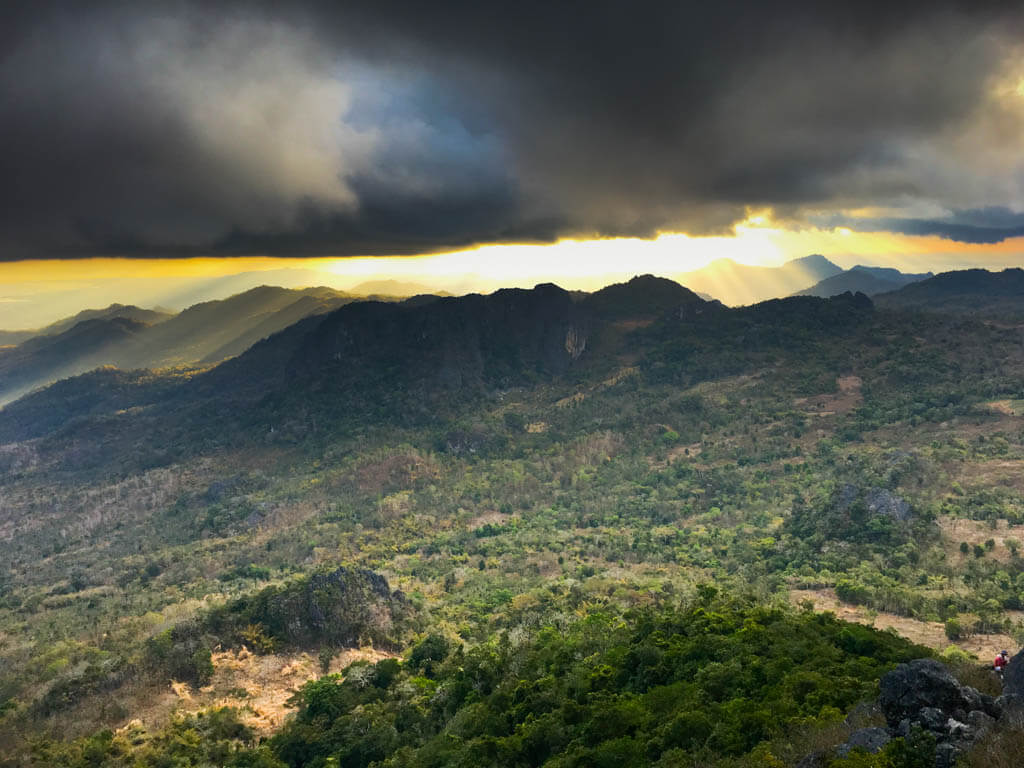 The lighting was spectacular as the sun began to set

West Timor is a great place to travel and exceeded all of our expectations.  If you want to escape the tourist traps of Java and the party scene of Bali (great though it is), Timor is a wonderful destination.  Here you will see a different side of Indonesia, in all its rough and developing glory. The hostel (there is only one) is basic, the roads rough and the culinary options limited (at least outside of Kupang), but the locals are friendly, the scenery is beautiful and it’s just a short flight away.  You’ll also meet a different type of traveller, the real adventurers out there, and you’ll be the star attraction for the locals everywhere you go.

This article is the second in a series of three articles I’m writing about my adventures in West Timor.  If you enjoyed it and want to know more, check out the others here:

West Timor: Crystal Pools and the Best Pork in the World

I loved Indonesia and also spent time in Jakarta visiting some off-the-beaten-track places such as Sunda Kelapa harbour.  Check it out here:

I also spent almost two weeks Couchsurfing in the Jayapura region of the fairy tale land of West Papua: