Exploring the State that Doesn’t Exist

Okay, so I admit it.  Like most people, I had never heard of the Republic of Gagauzia before in my life.  Until I met Inka that was. Inka contacted me through Couchsurfing because my profile looked like I might go to places where other people wouldn’t go and told me that she was looking for a companion to explore a place all her friends thought would be boring – Moldova, and specifically Gagauzia, in the rural south.  In a sense, she was right. If you’re looking for sightseeing action, Gagauzia has absolutely nothing going for it. But if you want to see a little bit of rural Soviet history beautifully preserved (without the hassle of getting an actual Russian visa), then it really has a lot to offer. And it was all the better for being completely unexpected.

Gagauzia is guaranteed a certain level of autonomy by Moldova’s constitution and has its own government and police force.  It is unique in that the areas it comprises are determined not by geography, but by demographics – i.e., by the percentage of Gagauz people living there.  This is different to any other state I’ve ever visited, recognised or unrecognised, and the result is that Gagauzia is made up of several separate areas spread across rural southern Moldova, and not one contiguous block of land.  A quick search on Google Maps shows this beautifully. 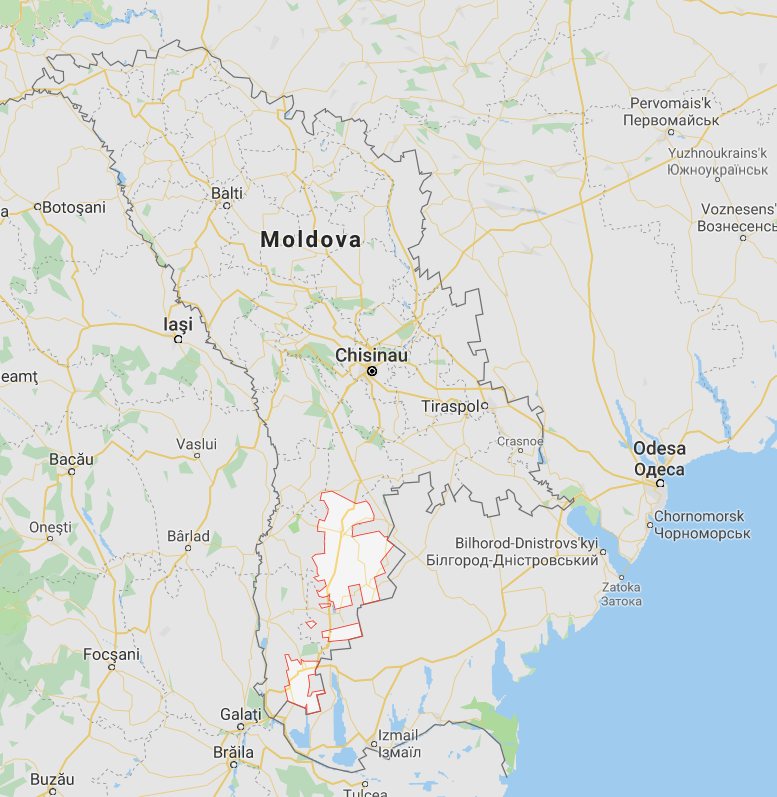 Gagauzia is spread over several areas of Southern Moldova

We visited 3 places in Gagauzia – Comrat, the capital, and the rural villages of Congazcicul de Sus and Beshalma.  If you visit just one of these places, go for Beshalma, which was interesting enough to get its own blog post, which you can read here!  Otherwise, visit all three.

Comrat is the capital of the autonomous region of Gagauzia, which doesn’t exactly make it a huge metropolis – the population is just over 20,000.  That said, Comrat is definitely grander than the other villages we visited in Gagauzia and has a lot of government administrative buildings. This was Inka’s and my first stop in Gagauzia and almost the moment we got off the bus from Chisinau it started to pour with rain.  We took shelter in Andy’s Pizza, which is like the Moldovan equivalent of Dominoes – there are branches everywhere. It’s useful for travellers because it always has great wifi. Us being us, we had no accommodation booked and no idea where we were going to stay, so we sat in Andy’s and searched for Couchsurfing hosts while tucking into delicious bowls of Zama, a Moldovan soup served in a bowl made of bread. 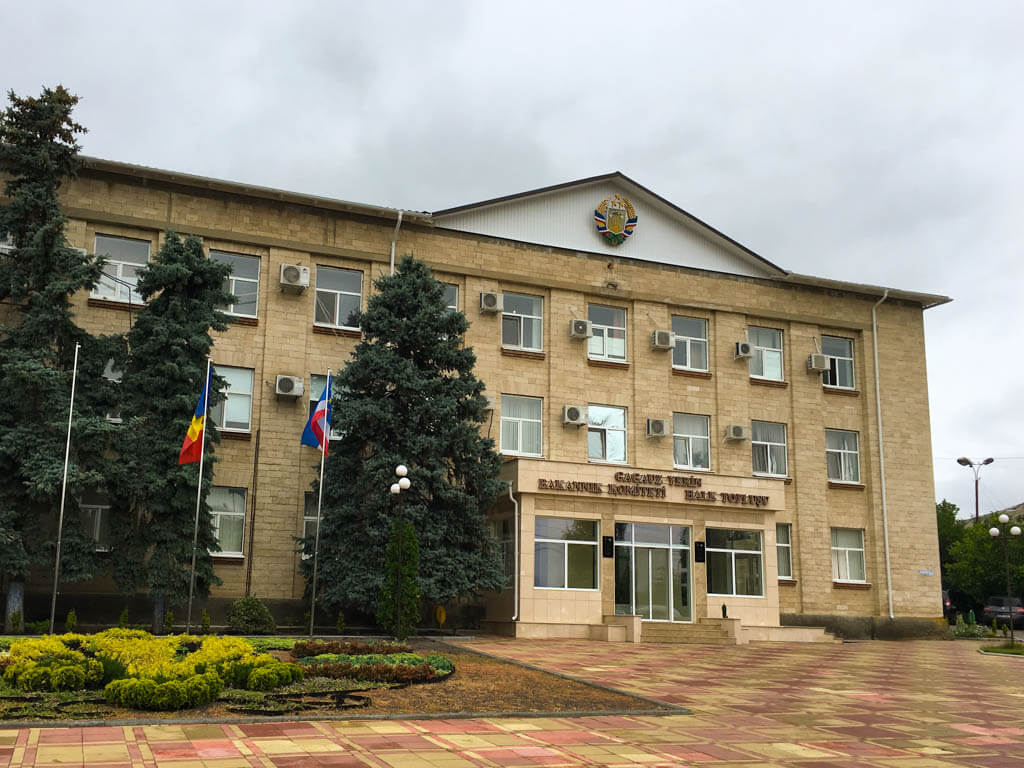 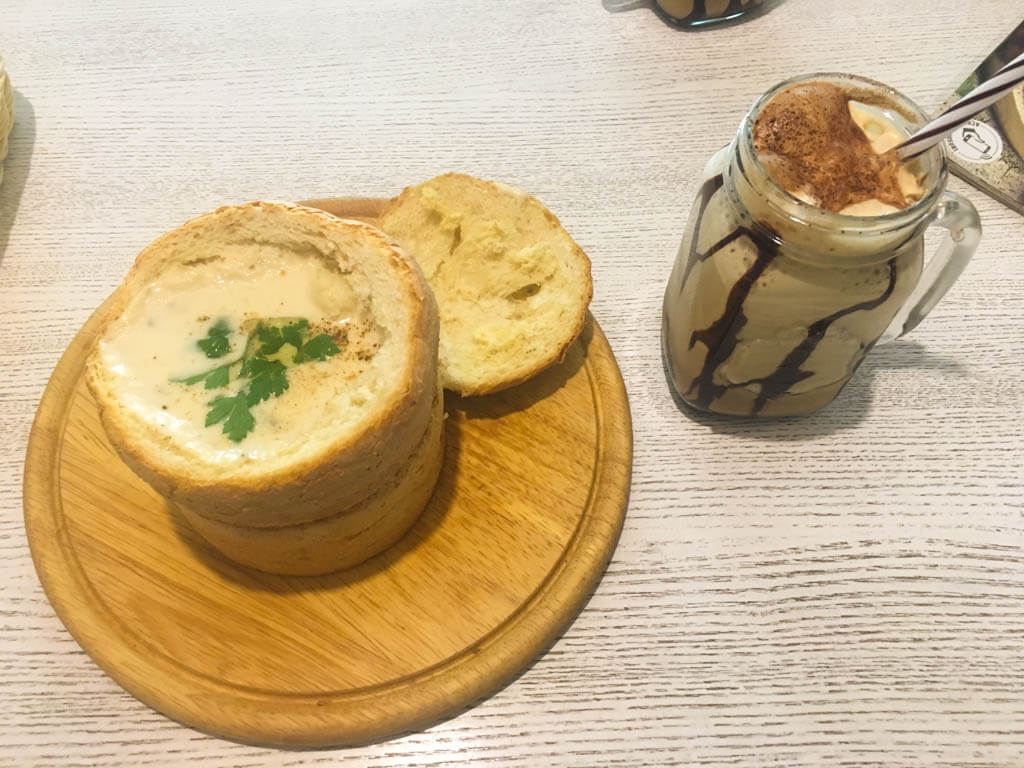 Finally, we hit the jackpot.  An old local lady who lives just around the corner from Andy’s Pizza (seemed like a great coincidence, but honestly Comrat is not so big) was hosting a couple of volunteers for the Peace Corps, who found us on Couchsurfing.  One of them, a French girl, was kind enough to brave the torrential rain and come and rescue us from Andy’s. We arrived at the house to find a Spaniard and an American eating an amazing dinner prepared by the old lady, who was incredibly friendly and an amazing cook. 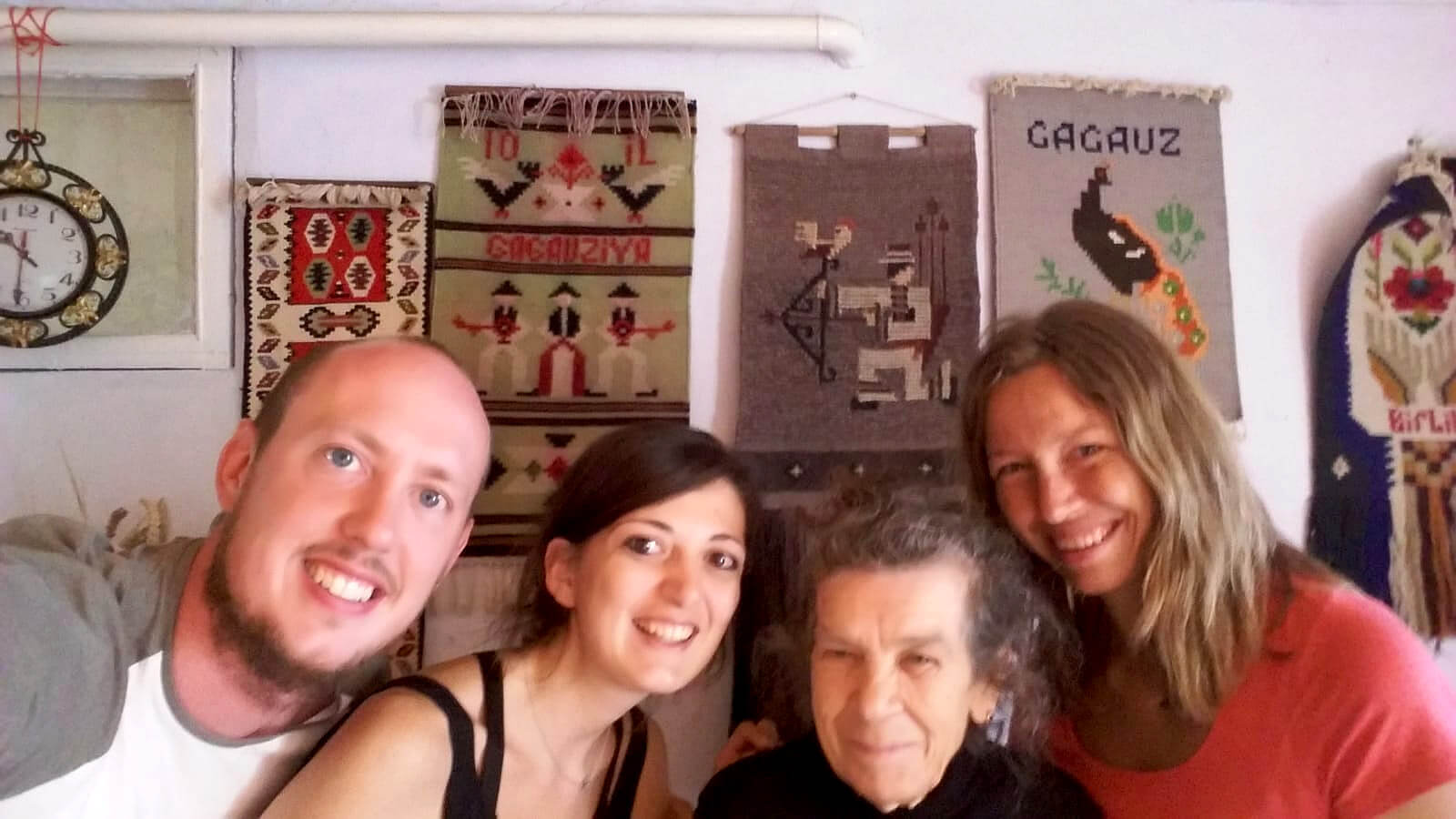 People are quite direct in this part of the world.  Despite not speaking much English, at some point during the evening the old lady managed to tell Inka that she should marry me and have my babies.  At least I knew I’d made a good impression! As the night went on and increasing quantities of Moldovan wine were consumed, the American guy gradually became ruder and more obnoxious.  He seemed to take particular delight in ridiculing the Spaniard, whose English was not really good enough to defend himself, until at one point it almost become physical, so myself and the French girl intervened.  Shortly after, the American guy disappeared grouchily into the night to return to whatever hole he’d crawled out from and we never saw him again.

The French girl had let us know very clearly before she picked us up that this was not Couchsurfing, even though we found them through the Couchsurfing site (no hosting requests were exchanged) and we’d be paying a small amount (about $5 each) to the old lady for food and lodging.  Fair enough.

The next day, after visiting Beshalma in the morning (read all about it here!), we met our Couchsurfing host from Congazcicul de Sus, Petea, who suggested a walking tour of Comrat before heading back to his house for the night.  The city is quite rural and very green, with wide leavy avenues of mature trees. It was also a bit shabby looking and the grey edifices of old Sovient buildings were slowly crumbling due to disrepair. That said, my overall impression is of a bright and lively place.  There was a bustling market, a glittering Russian orthodox cathedral and the obligatory statue of Lenin found throughout most of the former Sovient republics, although quite modest in size here. 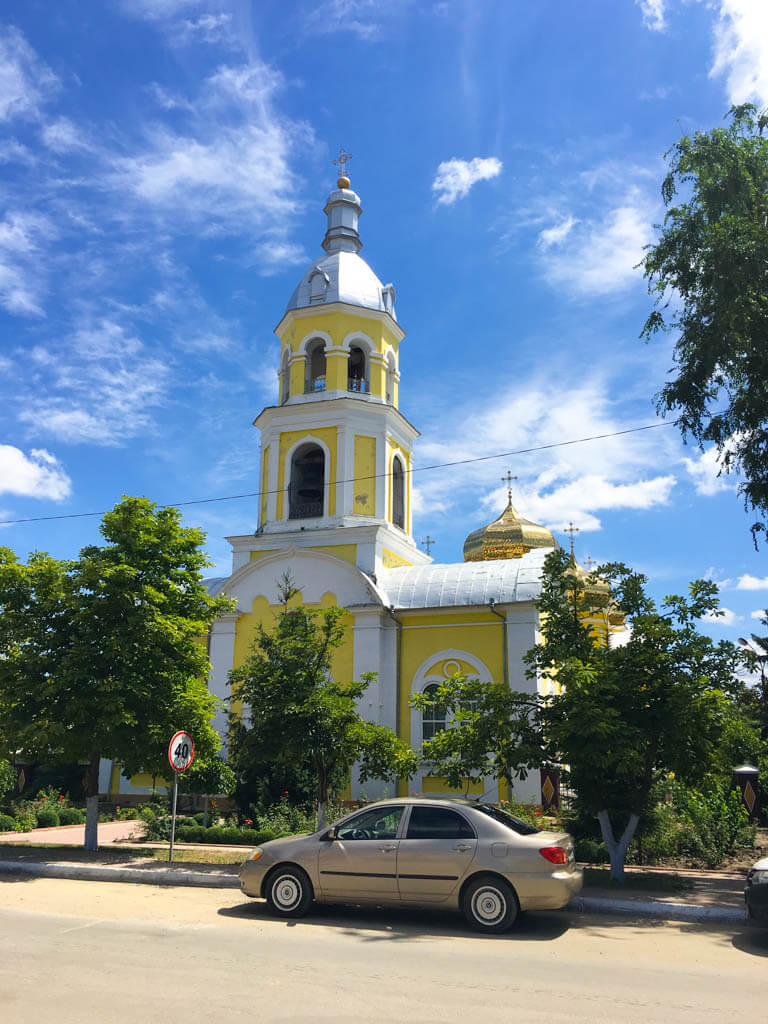 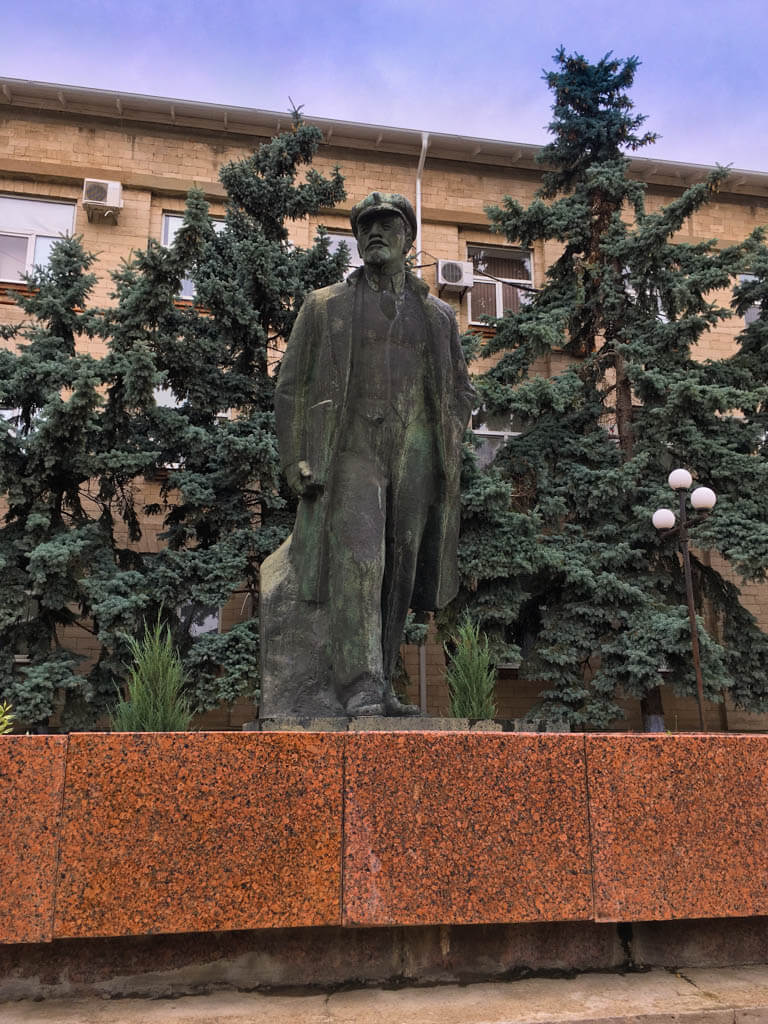 Lenin stands proudly outside of a Gagauzian government building

Most interestingly to me was a park with a broad path through the middle lined on either side by the stone busts of various leaders and notable figures of the former Soviet states.  I only recognised Heydar Aliyev, the late president of Azerbaijan, from my trip there the previous year, but I’m sure many of them would mean more to post-Soviet history buffs. There was also a typical Soviet eternal flame memorial, a flame that’s never extinguished, to the approximately 27m Soviet soldiers who died during the second world war.  Petea was very knowledgeable about the town and gave us a running commentary on the history of the sites as we walked. 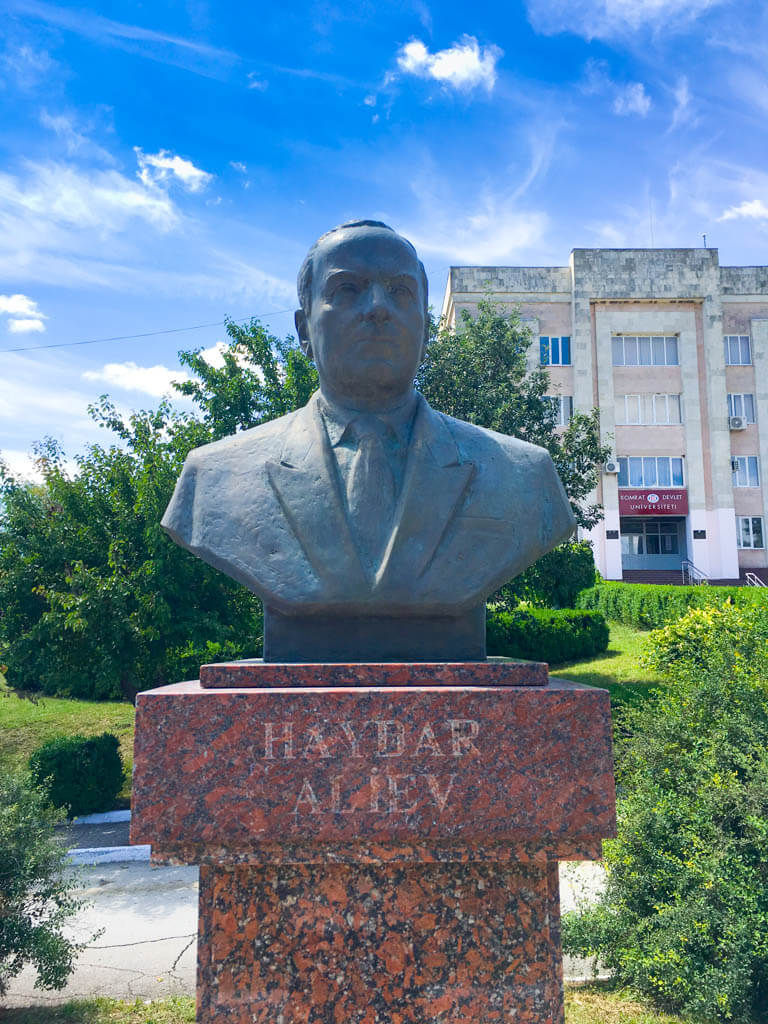 The bust of Heydar Aliyev, ex-president of Azerbaijan 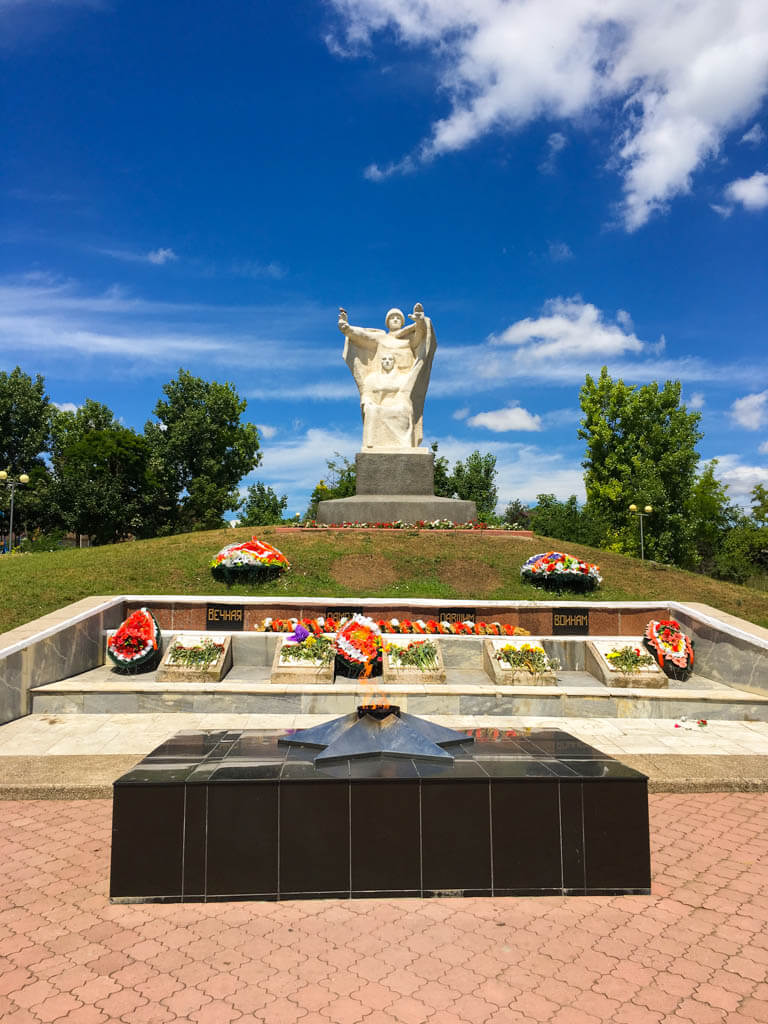 Eternal flame monument to the victims of WWII

This small village not far from Comrat is about as rural as it gets and a great chance to see rural life in a post-Soviet state.  We took a public bus though from Comrat with Petea. The journey, in June, was lovely, with vast fields of vivid yellow sunflowers passing on both sides as we wound our way slowly through the Gagauzian countryside.

The village itself is tiny, with a population of around 1,500, and has little that’s noteworthy.  Leaving the bus, we walked along dirt roads until we arrived at a pleasant little bungalow where Petea and his wife lived.  They showed us to our room and then asked if we were married. We created a bit of a kerfuffle when we said that we weren’t but that we were used to Couchsurfing, so sharing one bed wasn’t a problem.  Our hosts seemed really unsure about this, and asked multiple times throughout the afternoon whether they should prepare another room, but, not wanting to create extra work for them, we declined each time.  Our stay was lovely and they treated us very well with home cooked food, fresh strawberries from their garden and plenty of homemade kompot, a fruit drink popular in the ex-Soviet states. The only less comfortable part was having to walk across the garden in the dark at night to the outhouse to pee, but it was a small price to pay for such hospitality!

In the evening we were paraded past all the neighbours’ houses to say hi.  Petea seemed quite proud to be hosting foreigners and we certainly weren’t going to deny him the pleasure of showing us off.  Afterwards, we took a moonlit walk around the village, which was small and nondescript. Petea pointed out a big house belonging to an important business man, the village school, etc.  It was quaint and the night sky overhead was beautiful due to the lack of light pollution. 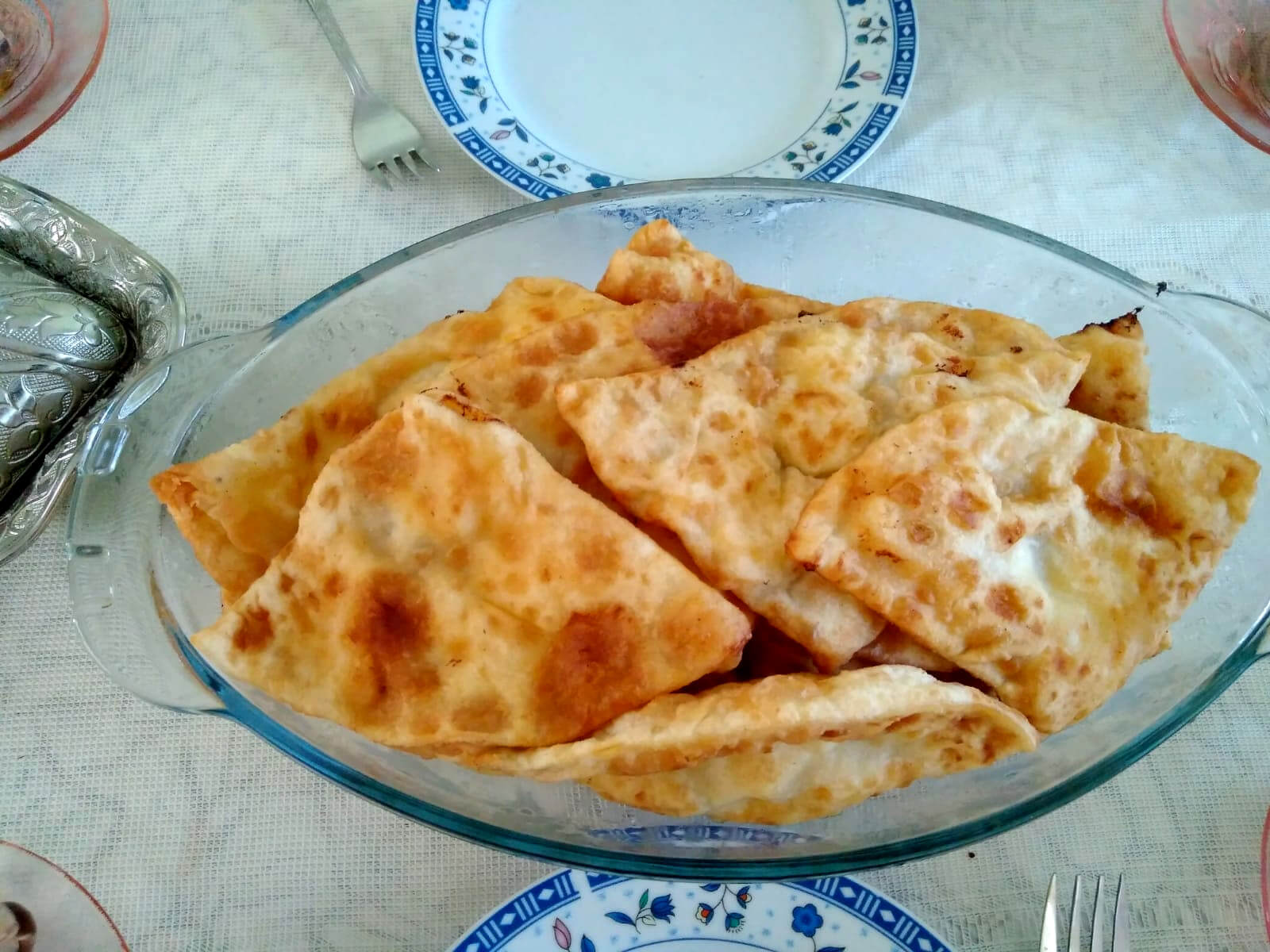 We stayed one night and, after a delicious breakfast of local pancakes, a much eggier creation than in the west, we headed back to Comrat the next morning.  While we were walking to the bus stop, we stumbled upon a decaying Soviet-era tractor by the edge of the road, a symbol of the neglect of this region since the collapse of the Soviet Union almost three decades ago (and a great selfie op!). 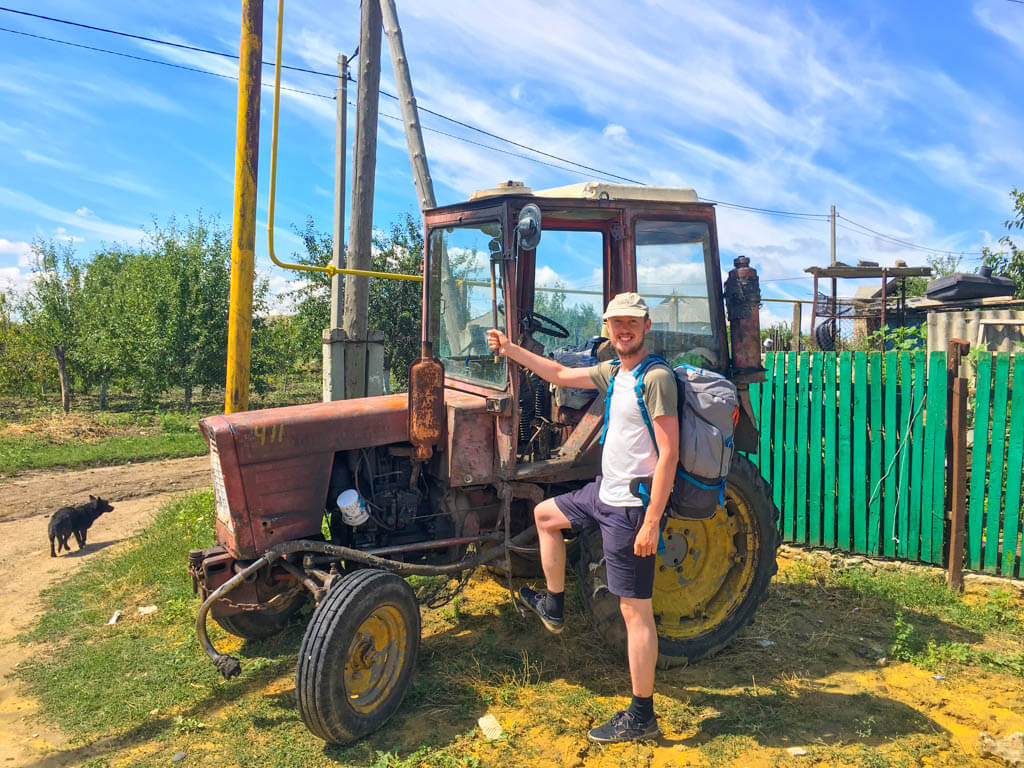 Me posing next to a decaying Soviet era tractor

Arriving back in Comrat, we had a couple of glasses of kwas (a traditional fermented Slavic beverage commonly made from rye bread) from a vendor at the side of the road and walked to Petea’s relative’s house where we met more of his family.  They gave us one of the simplest and most delicious snacks I’ve had during all my travels – a bowl of freshly sliced homegrown tomatoes and a bowl of chunks of homemade cheese. I only wish I’d stopped to take a photo of it before devouring it.

Finally, we picked up our bags and headed back to Chisinau.  Gagauzia is a region that I didn’t know existed, never planned to visit, and really enjoyed.  It’s a window onto both the past, having changed little since Soviet times, and the present situation in neglected post-Soviet states on the fringe of Europe.