How I Met the Sultan of Brunei

And how you can too!

How I Met the Sultan of Brunei

My friend Tim and I arrived in Brunei on a visa run from Indonesia with two litres of duty-free alcohol (as it’s illegal to sell it in Brunei, but legal for non-Muslims to import it for personal consumption) and no plan whatsoever.  Then, on our first night, the owner of our hostel mentioned that the sultan was celebrating his 73rd birthday that week and that there was a chance to meet him. Our mission was clear – a selfie with the sultan! Our plan? We figured that between our amiable smiles, my beautiful blue eyes, and Tim’s Bahasa skills, we’d manage to talk our way through the security detail and reach the main man himself. 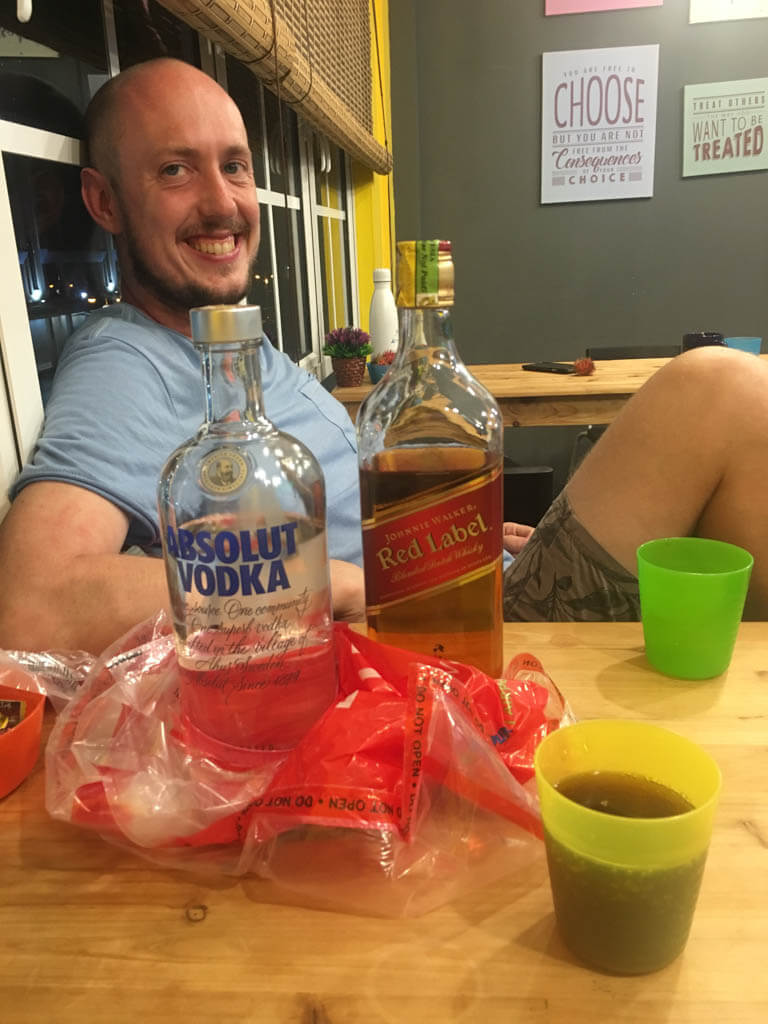 Brunei is tiny (like smaller than Cyprus tiny), rich due to oil and gas, and has an absolute monarchy, one of only a few in the world, headed by the Sultan, Hassanal Bolkiah, who has been in power for 52 years.  Since 2014, the nation has practiced sharia law and the sultan recently caused an international outcry when he introduced the death penatly by stoning for homosexuality and adultary, leading to boycots of hotels he owns in London.  Angel or demon? I’m not judging and you can make up your own mind.

On the day, a Dutch girl called Joella joined us and we set off for the central park of Bandar Seri Begawan, where the main event was to be held.  The park was all decked out with purple and yellow ribbons and huge pictures of the sultan smiling benevolently and waving at his subjects at various past events.  We arrived at the event two hours early and enjoyed the carnival atmosphere, as groups of dancers posed for photographs in traditional costume, ready to perform for the sultan.  The colours were amazing. 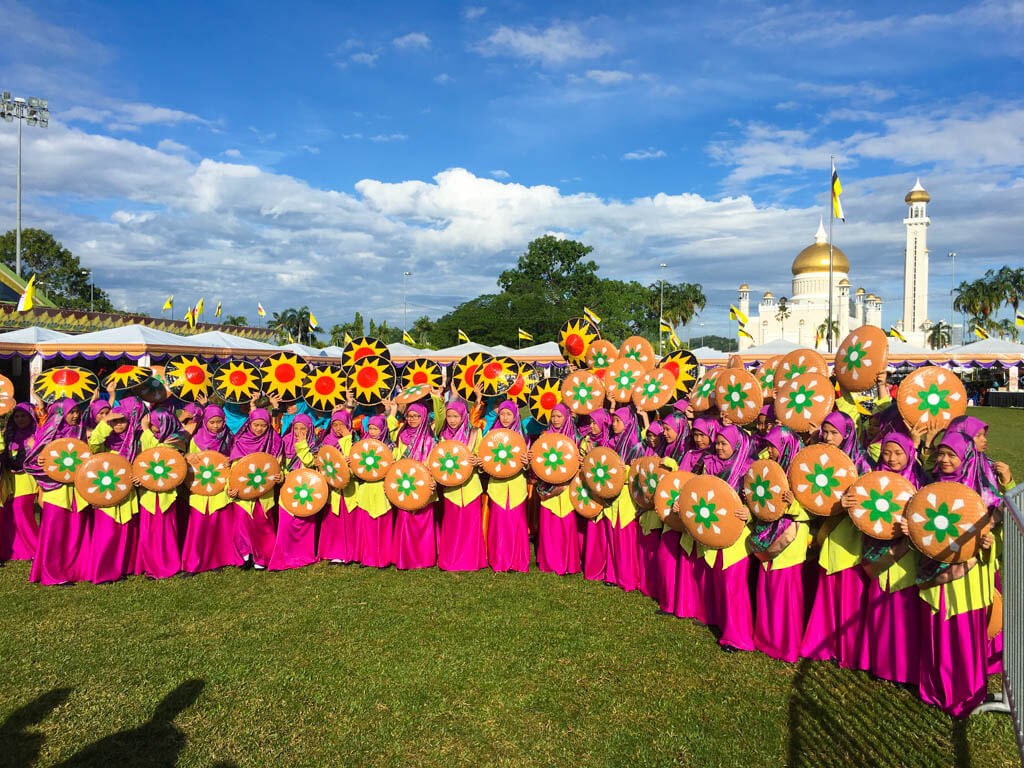 Performers pose for photographs while waiting for the sultan to arrive 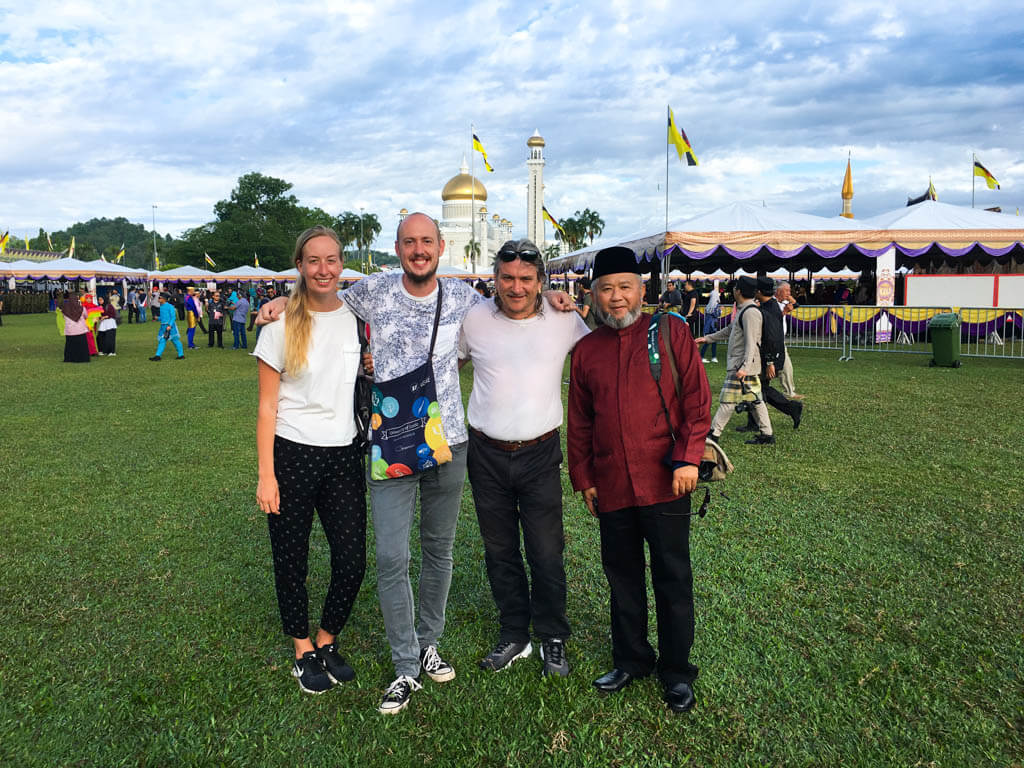 It wasn’t long before a reporter from RTB, one of Brunei’s national TV stations, saw us and jumped at the opportunity to interview us on what we thought of the event.  We kissed serious ass, saying how much we were enjoying the event and how wonderful it is to have such a benevolent and accessible monarch. Much better than Queen Elizabth II, I told them – when I saw her in Melbourne I couldn’t get within 300m.  The reporters told us that not only would we be on the 8 o’clock news that night, but that the video would also be uploaded to YouTube later the same evening. Perfect for linking to in a blog post! 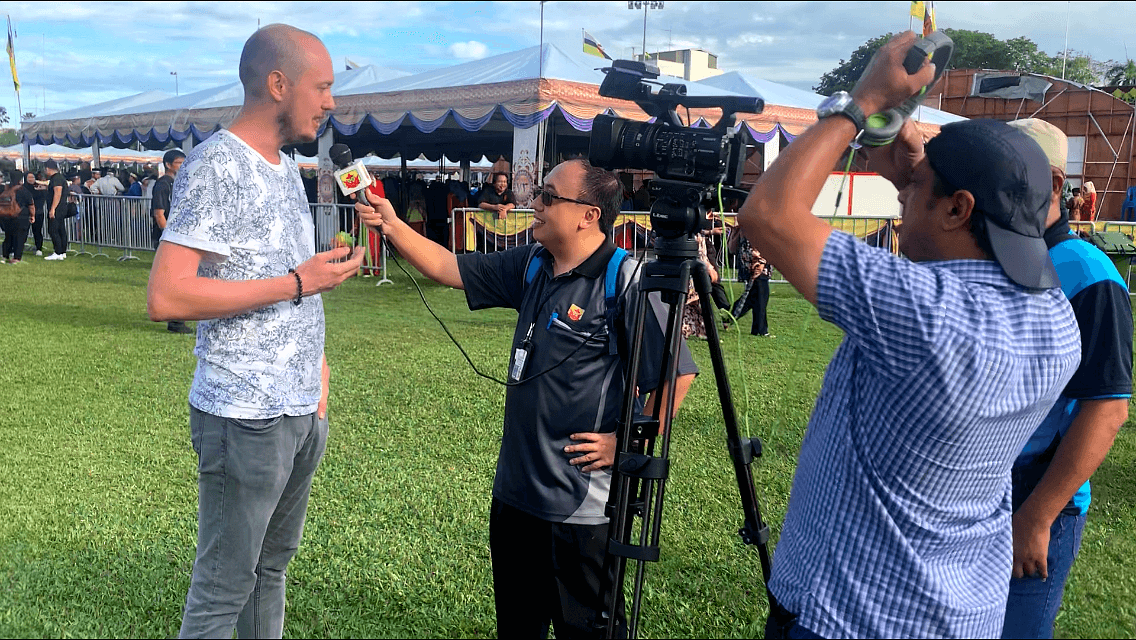 Around 9am everyone was getting in position, so we found a spot near the start of the path along which the king would walk after the dance performance to shake hands with his subjects.  Our secret weapon – Tim lives in Indonesia and speaks Bahasa, the same language as is spoken in Brunei. He’s also got the gift of the gab and we figured that a charismatic Bahasa-speaking white guy would be able to talk his way to a selfie with the sultan, taking myself and Joella along with him.

At 9:15, a sudden hush fell over the crowd and a line of black and white Mercedes cars pulled into the park.  Music played and the sultan stepped out of one of the cars, flanked by two of the princes and his brother. They climbed the stairs to the royal box and a traditional dance performance commenced on the stage that had been erected before it.  Here was one of the last remaining absolute monarchs in the world, with a net worth of over $20bn, and amazingly we hadn’t even been through a metal detector on the way into the park. Brunei is a very safe country and it’s obvious that the people love their ruler. 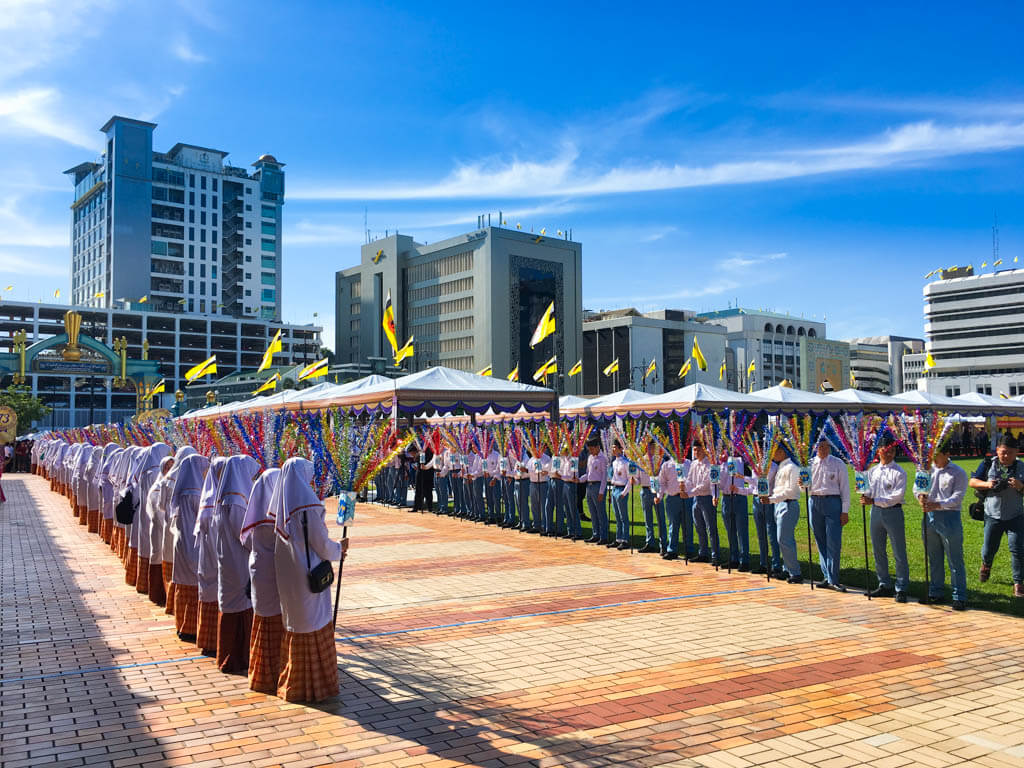 Similar events had been run in other cities across Brunei already, and a Polish girl we’d met in the hostel had already been to three of them with an ulterior motive – she was hoping to bag herself a prince charming!  Or at the very least, if not charming, then very rich! Joella didn’t seem to have grasped the potential until I mentioned it, after which she soon got down to debating the merits of the different princes – the crown prince would  probably be richer, but the younger one was kind of cute, rich enough, and looked kind of like a skinnier version of Taylor Lautner from Twilight. What a choice! Unfortunately none of the nine princesses of the royal family attended, so any hopes I harboured of marrying into the family would have involved a major change of lifestyle…

The performance was nice and I liked the fact that the choreography was not perfect like in Chinese and North Korean performances.  Especially when children were dancing, some of the timing was slightly off, which in my opinion didn’t detract from the dancing, but gave it a more human feel.  The performers also looked like they were enjoying themselves. After the performance was over, the sultan and his entourage mounted the stage and chatted with the performers and then it was time for the main event – the meet and greet with the common people. 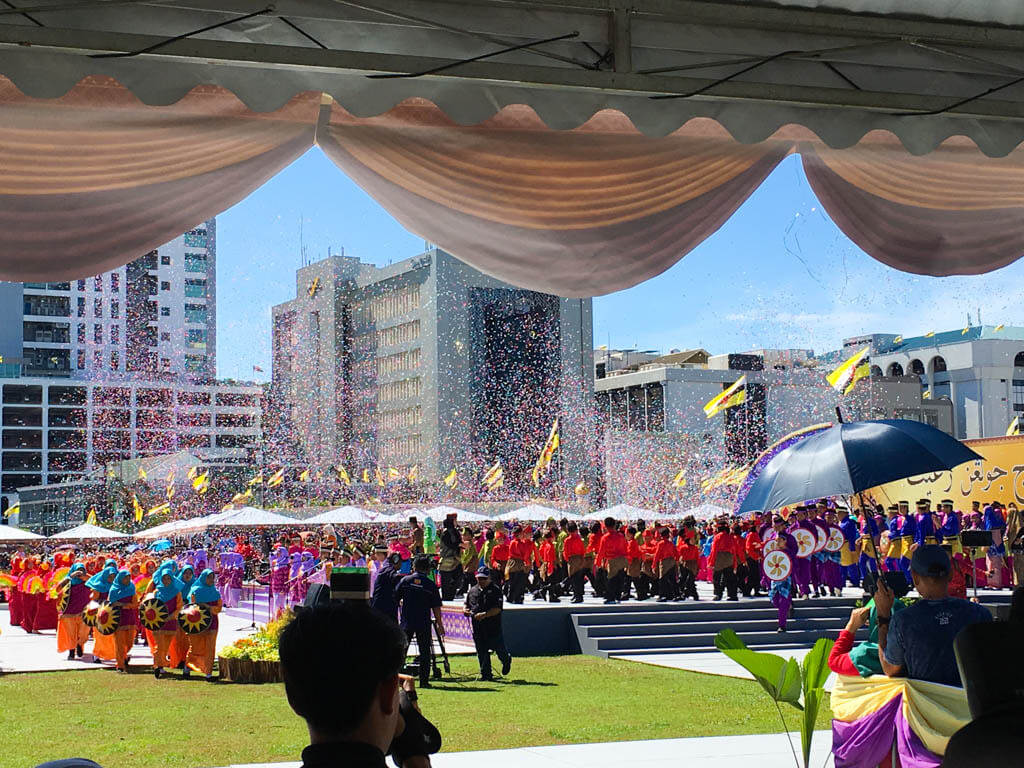 We had our cameras at the ready as the sultan drew close and Tim stepped up to greet him in Bahasa.  The sultan politely spoke a few words with him, shook hands with me and asked where I was from (in the heat of the moment I completely forgot to add ‘your majesty’ when I replied) and then extended a hand to Joella.  WIth all the preconceptions of male muslims not touching females, she froze and didn’t shake his hand, which he eventually withdrew! We then all posed for a selfie together.

There is a rule that, other than the handshake, no one is allowed to touch the sultan, and one of the security team seemed to think I was standing a little too close.  Just as we were taking the photo, he put his arm around my waist to stop me moving further forward. The result was that I’m kind of bending awkwardly into the shot between the sultan and Joella!  Tim managed to hold his camera the wrong way around and take a nice photo of the crowd in front of us and I was at the wrong angle for the picture, so we almost didn’t get the photo at all, but luckily Joella got 3 good shots, so we didn’t come away empty handed, although she was kind of grimacing in concentration while she took them!  So we got our selfies, but they were far from perfect! 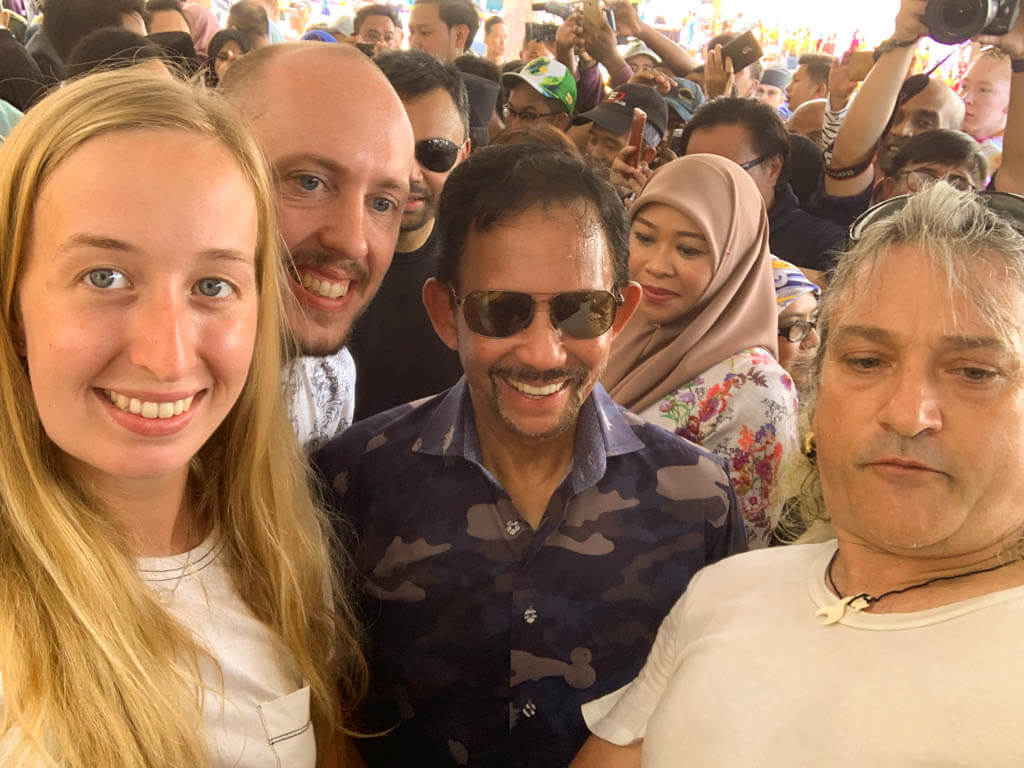 Our awkward selfie with his majesty the sultan

The sultan had literally thousands of people waiting to shake hands with him and so politely moved on.  All credit to the guy for hard work – he was there for a good three hours meeting people and still had a long way to go by the time we left.  We backed off and regrouped. We were happy that we’d got the shots, but not 100% happy. We hung around for a couple of hours, at which point the sultan was still going strong, but the crowds were less dense, and then decided to try again.

The second time, the sultan extended his hand to me and I shook it.  He asked where I’m from and I managed to say “Scotland, your majesty”.  To which he said “It’s you again!” in a surprised voice. We explained that our original selfies hadn’t come out so well and asked whether his majesty would very graciously pose for a second round.  This time everything went perfectly. Tim took a video and I reeled off several photos with all of us, the sultan included, smiling like one big happy family. 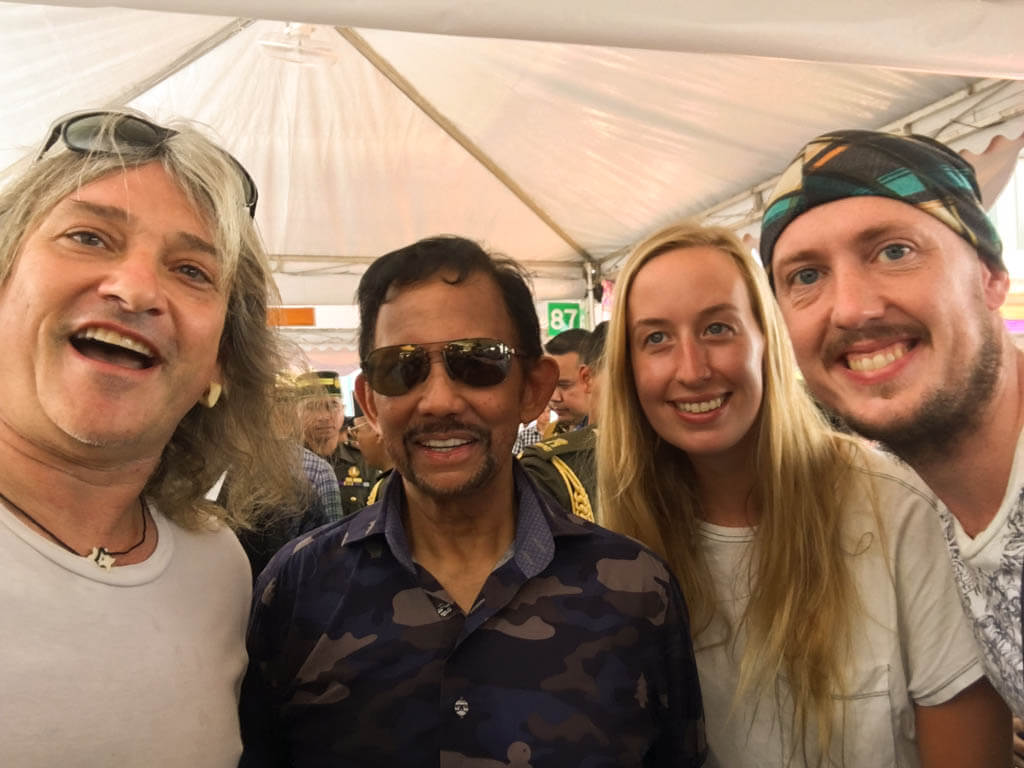 Hanging with the Sultan of Brunei

I felt like I was on a roll at this stage, so decided to take a crack at the princes.  They were a bit less mobbed by admirers than the sultan and one of them even asked how I liked Brunei, so I was able to chat with him a little.  Well, for long enough to tell him how amazing I think his sultanate is! And Joella finally came away with photos with her potential future husbands.  Quite a haul! 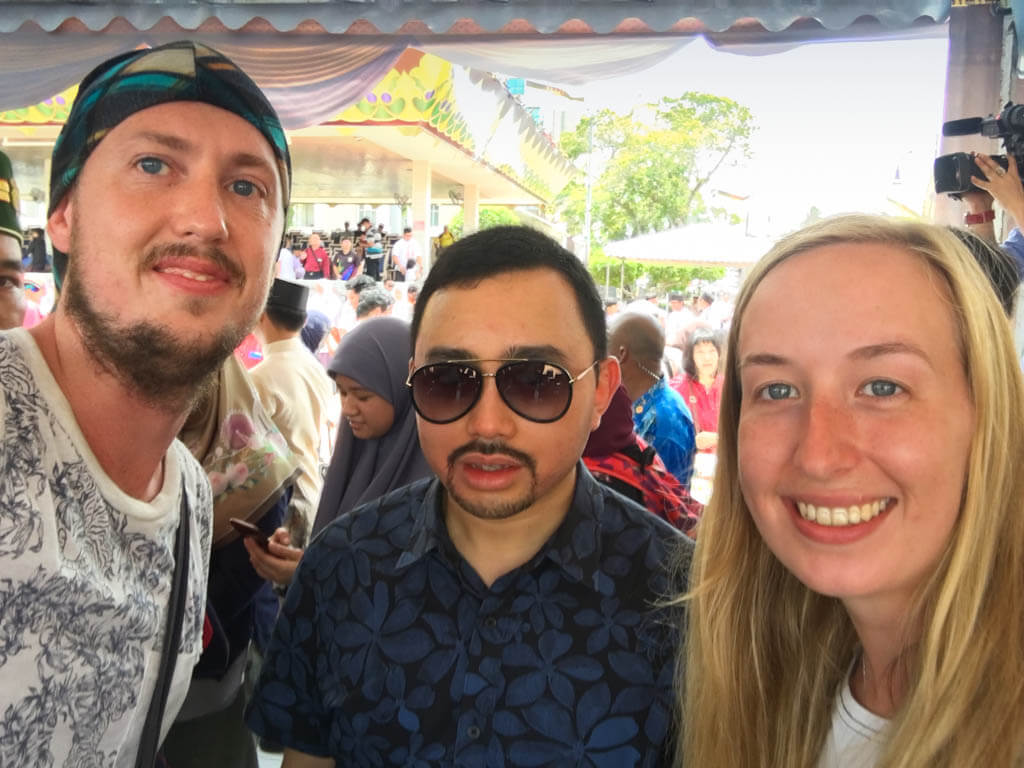 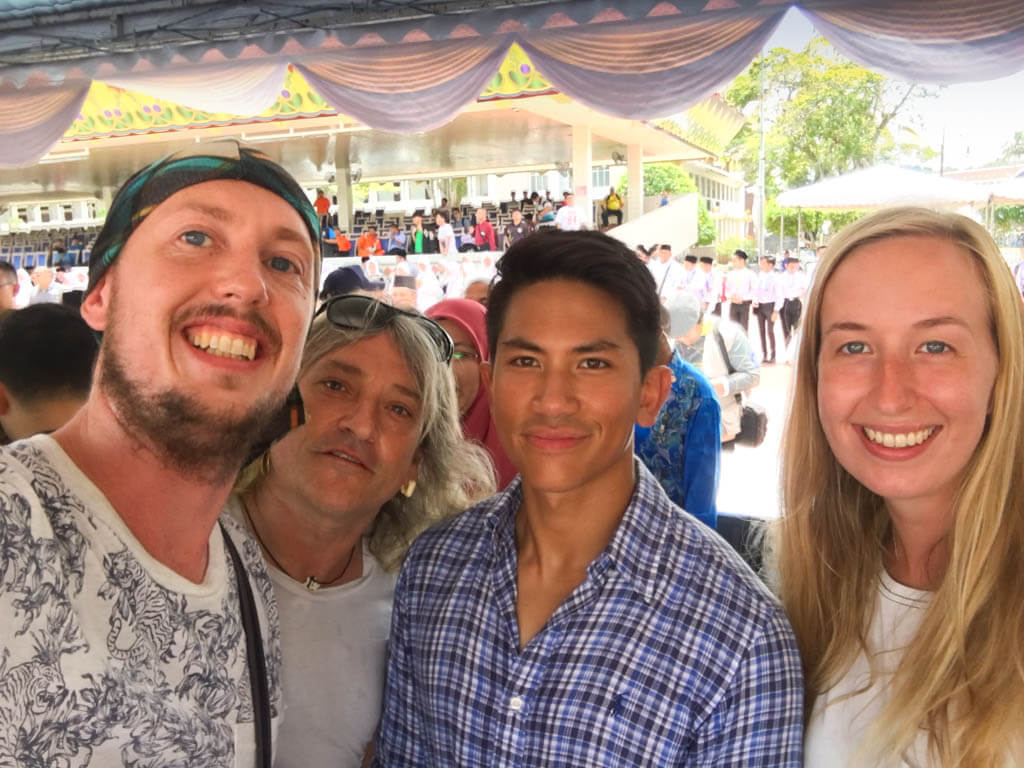 Finally, we headed back to our hostel, walking along the line of people that the king was still to meet.  For a 73 year old, he’s pretty spritely! We waved as we walked, our western looks giving us minor celebrity status, and the people waved back, laughing and smiling as they did.  So we got to feel a little bit like sultans and sultanas ourselves! 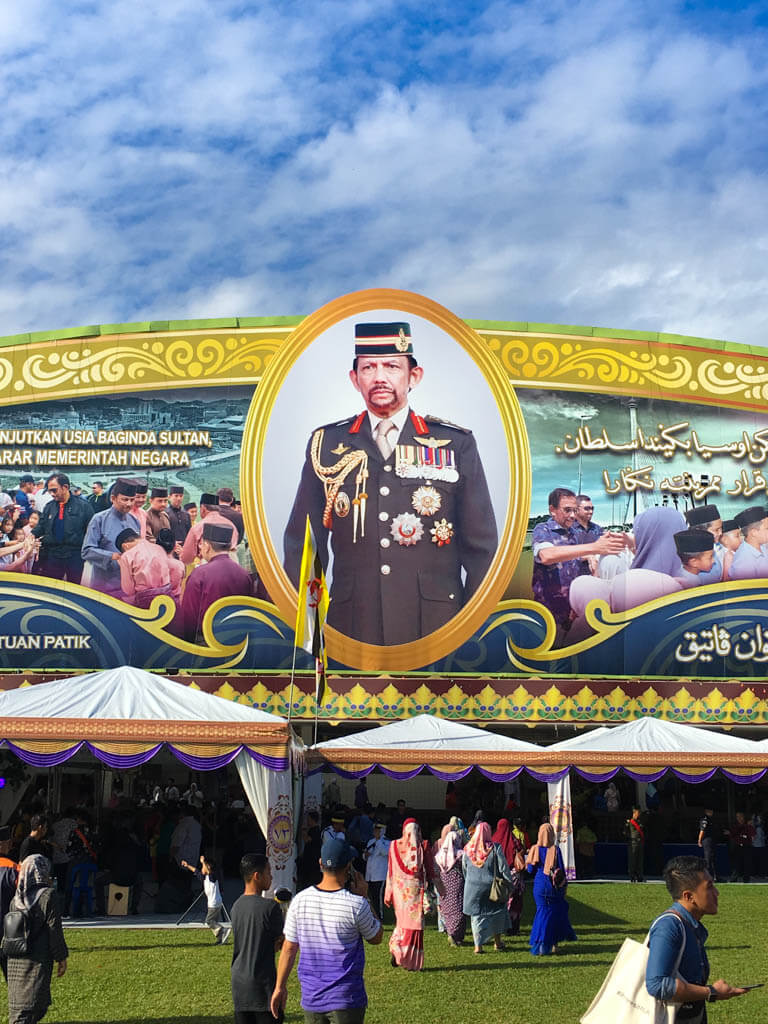 That evening we missed the 8pm news, but kept checking YouTube for the interview as the night went on.  It never appeared! I still have no idea why, but a couple of days later it turned up on RTB’s official Facebook page.  You can watch it here (we are at 30:15):

Useful Tips and How to Meet the Sultan Yourself