The Grand Canyon of India

Gandikota – The Grand Canyon of India

Gandikota was quite simply the most amazing place in India that no one has ever heard of.  Like many backpackers, I had originally planned to visit the ancient temples and hippy island of Hampi, famous for its beautiful scenery and lax approach to marijuana law enforcement.  However, I’m not really into marijuana and I was already templed out from South East Asia, so when my Couchsurfing friend Priya, who’d already been to Hampi, decided to join the trip, I suggested we go somewhere new to both of us instead. 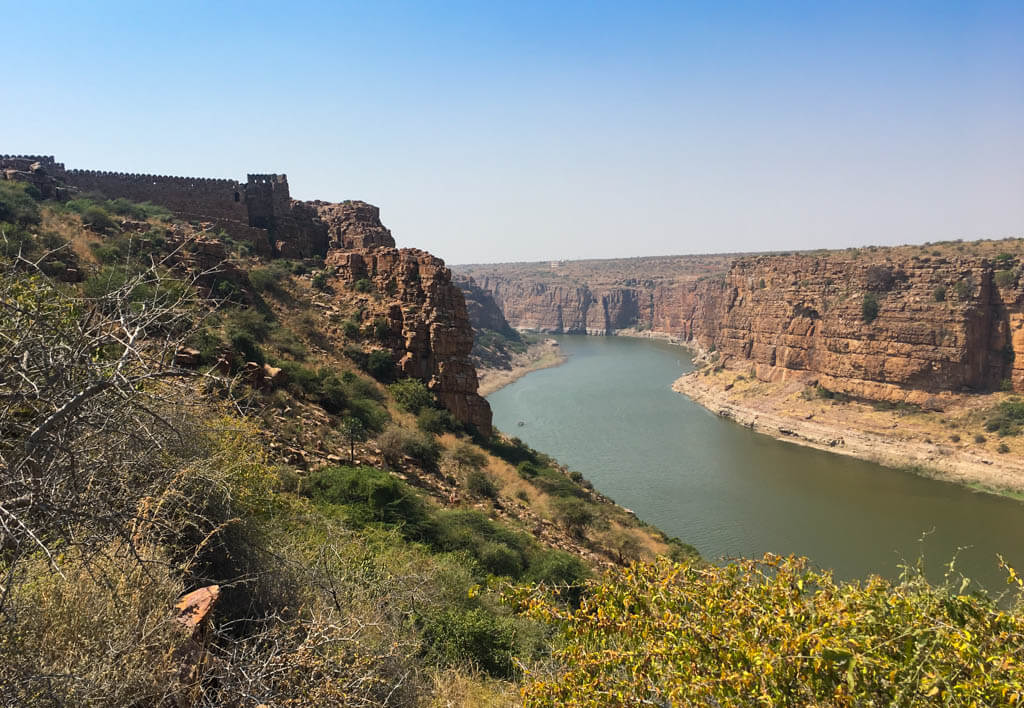 The gorge with Gandikota city wall on the cliffs above

Priya, who’s from Tamil Nadu in southern India, put together a shortlist of nearby places and came up with an unexpected gem – Gandikota, the ‘Grand Canyon of India’.  How could I possibly resist the chance to go to a place that almost no non-Indians have ever heard of, let alone visited? The only hurdle was how to get there, as we didn’t have a car or much time, because Priya had to be back at work on Monday.  However, travel logistics is one of my strong points, so I got on Google and pieced together a route from a mixture of Indian travel blogs and advice from a local Couchsurfer called Kesava.

After Priya finished work on Friday night, we met at a bus stop in southern Chennai and took a local bus to the APSRTC bus station in the north (which can take up to 3 hours thanks to Chennai’s congestion).  From there we took a night bus with decaying seats and no AC (no luxury or sleeper buses here, we were heading into real rural India!), arriving in the village of Jammalamadugu around 7am on Saturday morning.  Our awesome Couchsurfing host, Kesava, biked over from his home village and met us at the bus stop despite the early arrival time. We then took a local bus from Jammalamadugu to Gandikota village while he and his friend rode over on his bike.  When I first contacted Kesava, he even offered for us to stay at his house, but after finding out that I was travelling with a girl, decided this would be inappropriate (the neighbours would gossip apparently!), so instead he pitched a tent for us in a prime spot overlooking the gorge – a really unique Couchsurfing experience. 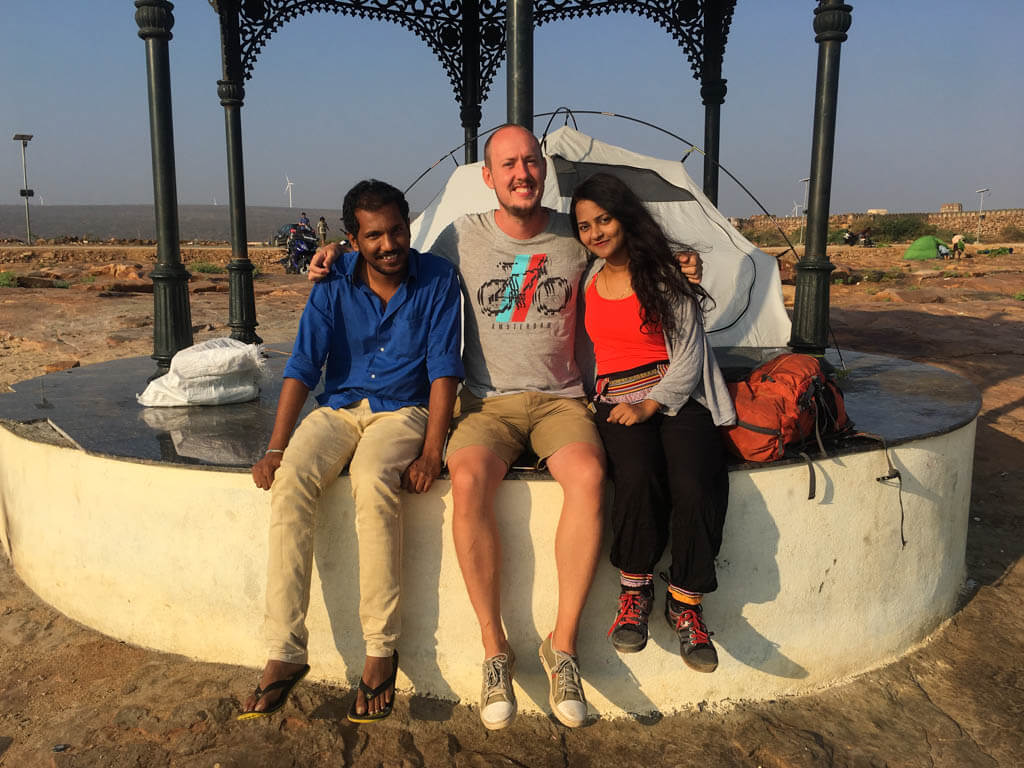 The gang hanging out next to our tent

Alighting from the bus on the main road just outside the Gandikota gate and ancient city wall, we were stunned.  The ancient walls and fortifications still stand tall around the village and, unlike some city walls in India (e.g., at Fatehpur Sikri), they have not been recently renovated and so appear absolutely authentic. 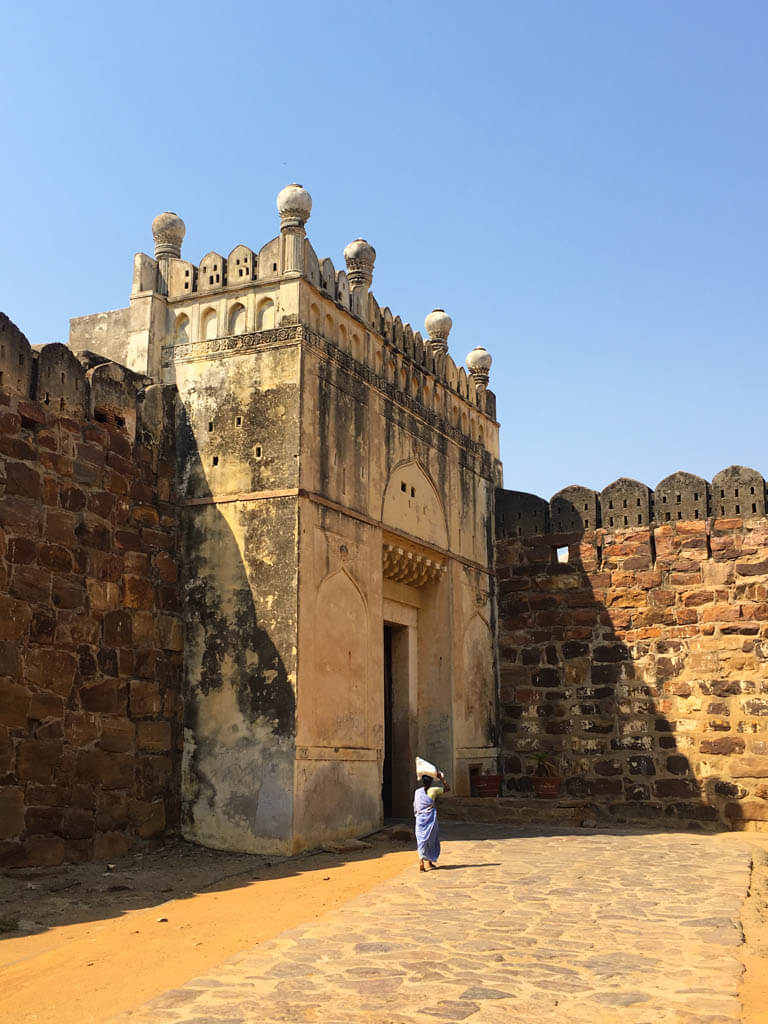 The entrance to the ancient village and fort of Gandikota 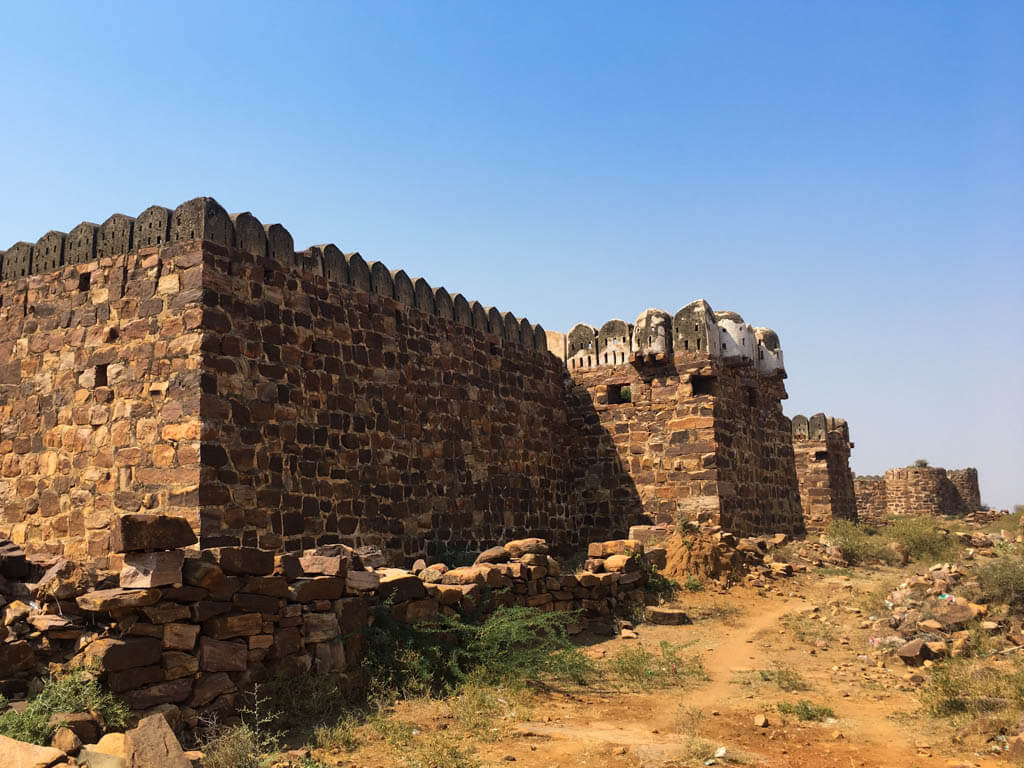 Kesava took us to our tent, which he had pitched at the top of the gorge outside the city walls, and we used the facilities of the local campsite to freshen up before admiring the beautiful view over the ‘grand canyon of India’.  To be fair, it’s not as impressive as the one in the US (not as big), but it was still impressive and I enjoyed the fact that we were the only foreign travellers there. It is truly beautiful and if the gorge itself is not quite the Grand Canyon, the village is an undiscovered gem that easily surpasses anything you will find in that part of the US.  It consists of a modern part (well, modern compared to the rest of it), where the residents live, and the historic fort and other buildings, which date back to the thirteenth century. Both parts are encompassed by the majestic city walls.

The modern village consists of a cluster of rural Indian houses, many of them now deserted as people have moved away to look for work opportunities elsewhere in India.  The residents are friendly and didn’t mind us poking about, especially as Kesava knew most of them and so we were considered to be friends of a local. A couple of shopkeepers even let us leave our luggage in their shop during the day, so we didn’t have to carry everything around with us. 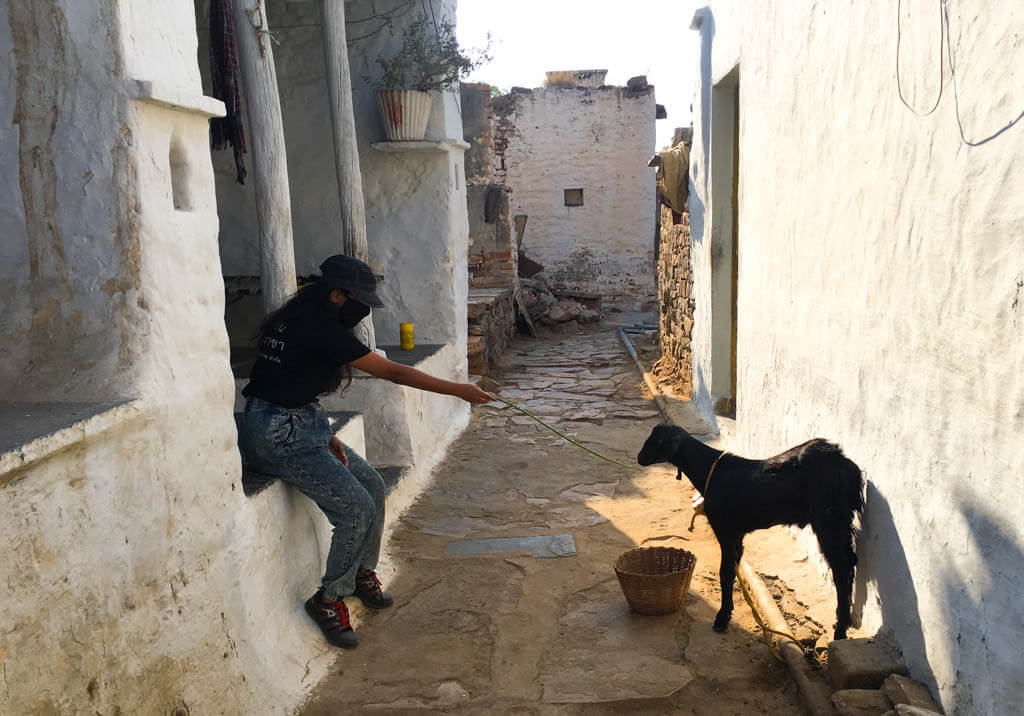 Priya playing with a goat in Gandikota village

Many of the older buildings of the city, such as the Hindu temple and mosque, have been well maintained even though they are no longer in use today.  When we arrived, the temple in particular was stunning in the morning sunlight. All the buildings, old and new, are clustered relatively close together and it’s a joy to wander among them.  Kesava’s knowledge of the village’s history was impressive and he accompanied us for an hour or so to introduce the highlights, before going off to attend to his business for the day. 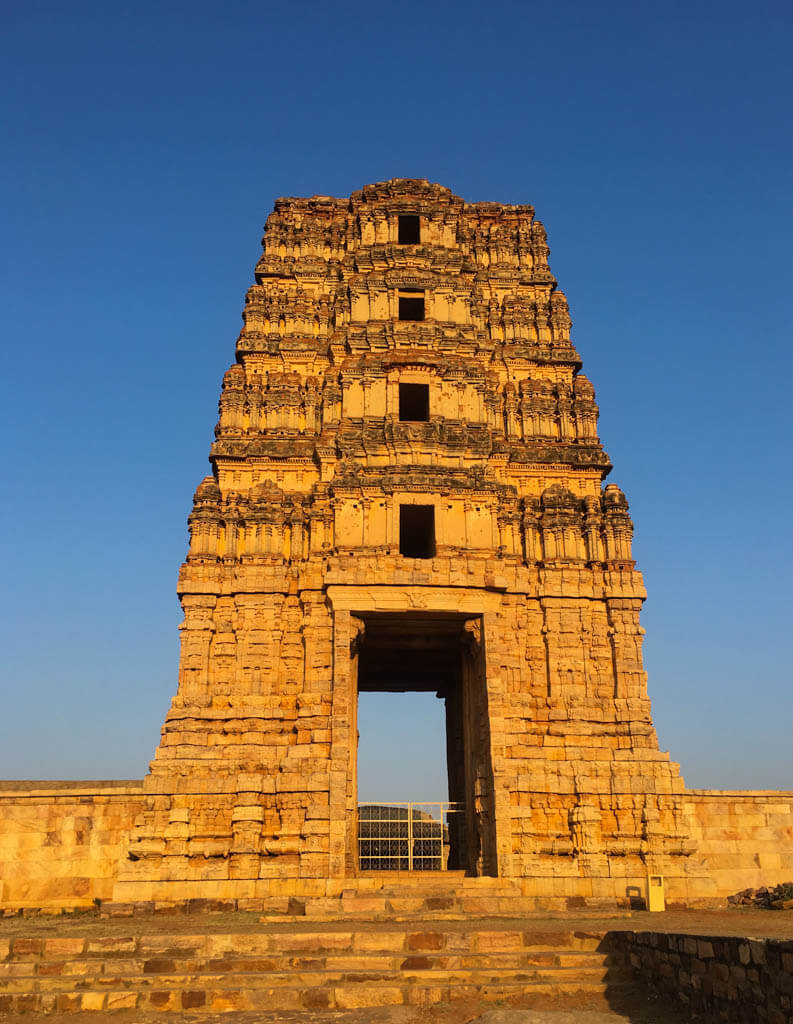 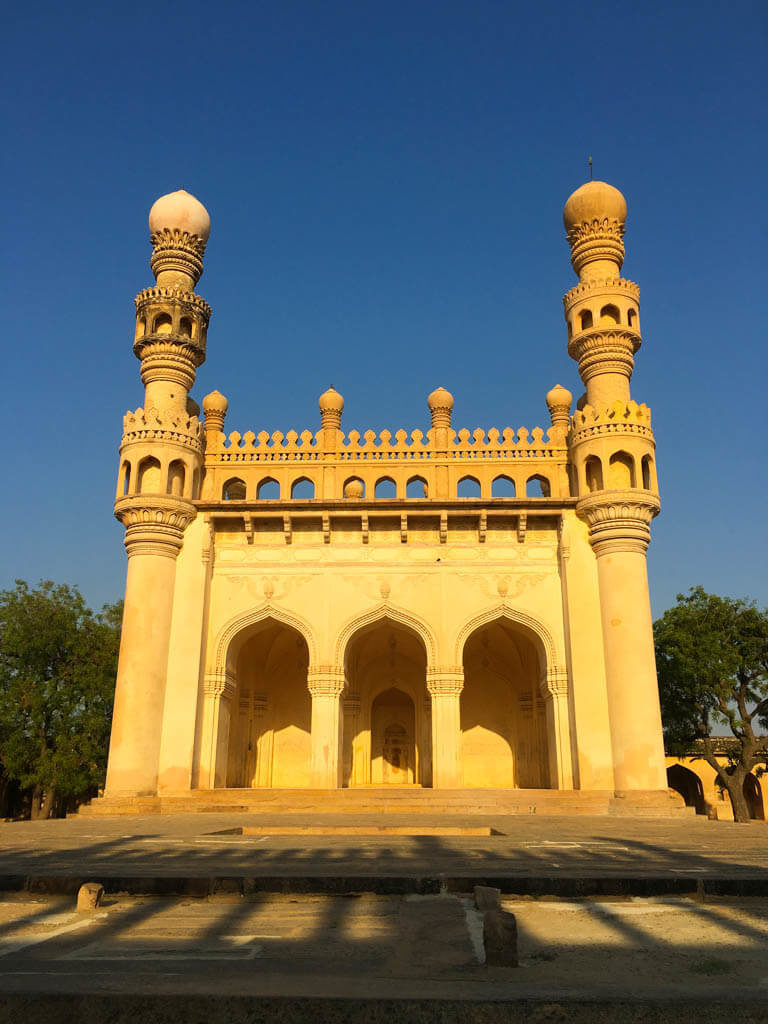 The ancient mosque at Gandikota, just across the road from the Hindu temple

After Kesava left, Priya and I returned to the campsite and made our way down into the gorge. The trail is marked with a dashed white line painted onto the rock and the start is not far along the clifftop from the city wall.  The dashed line isn’t that obvious at the start though, so you need to go down to the slightly lower part of the rock below where people pitch their tents to find it. Unfortunately, we missed it completely and ended up on a different path, starting nearer the official campsite. About halfway down it petered out and we got a bit lost, scrambling over rocks and bushes, but eventually managed to join up with the main path, which is when we discovered the dashed line.  Anyway, it was all part of the adventure. Excluding getting lost, the descent only took about half an hour (coming back up depends a lot on your level of fitness!). It can be a bit of a scramble at times and quite steep, but the scenery makes the effort worthwhile and we even saw some birds of prey circling overhead (maybe they were vultures hoping to feast on our corpses should we get further lost?). 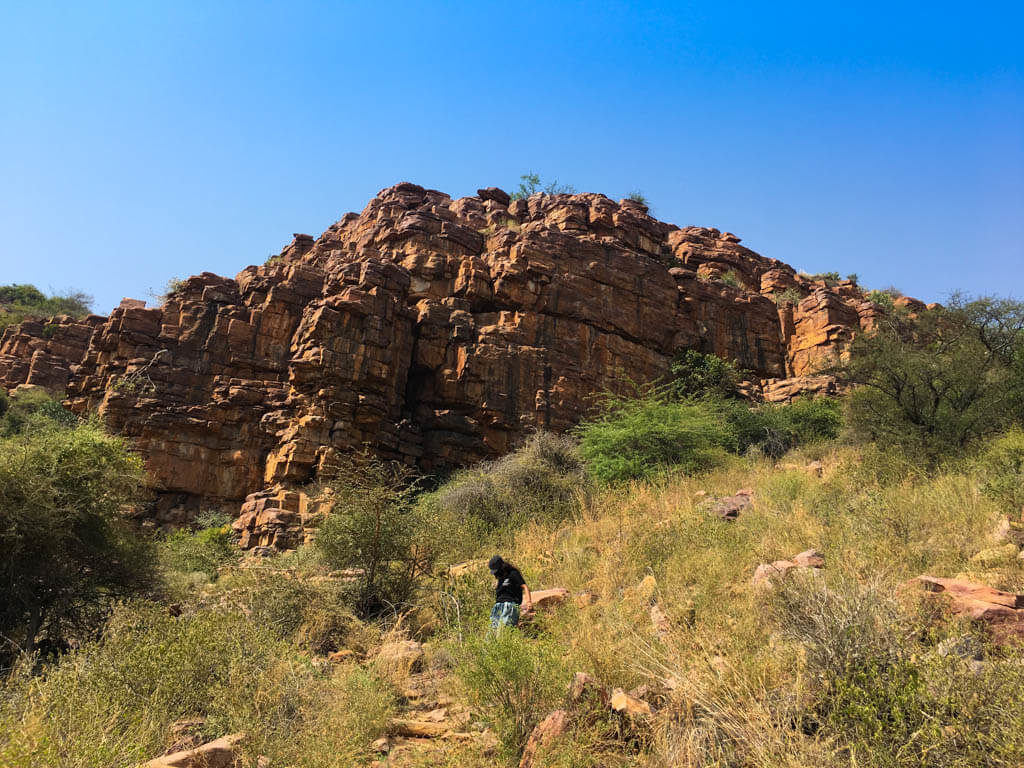 Priya making her way down the path in Gandikota gorge 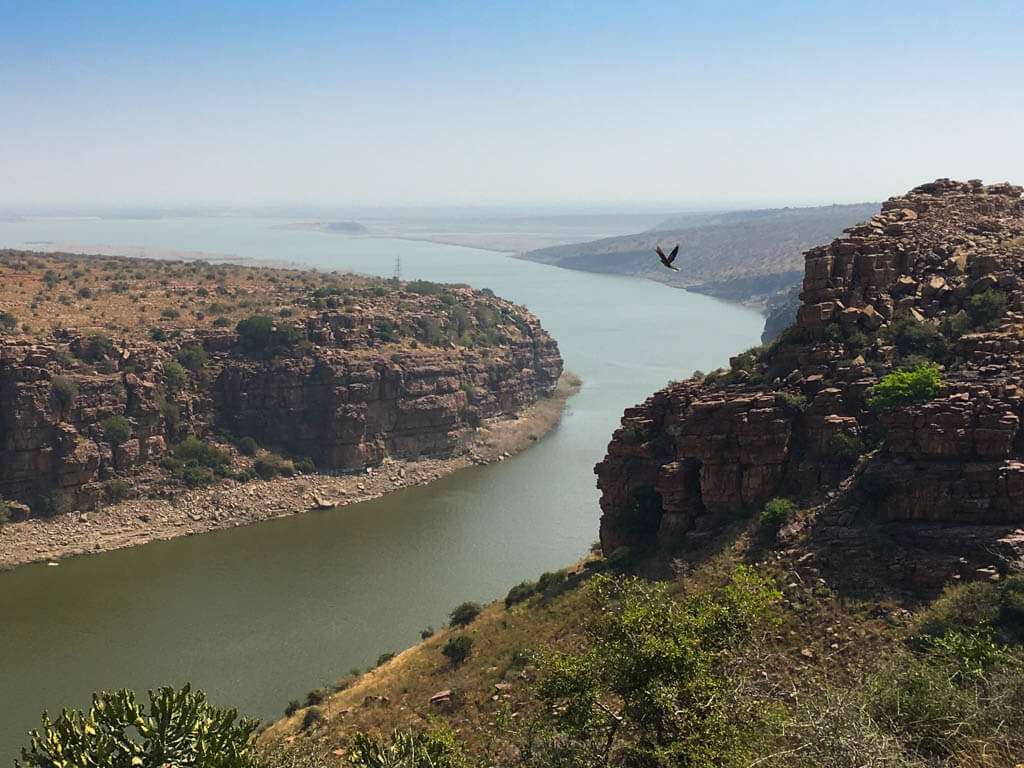 A bird of prey soars above Gandikota gorge

At the bottom we took off our shoes and sat with our feet in the water, enjoying its cool touch under the hot sun as the mercury pushed towards 40 degrees.  A group of Indian tourists came down and kayaked for a while in a very unstable-looking boat and we chatted for a bit before they left. Then I couldn’t resist.  I stripped off and jumped in for a swim. The water was not the cleanest, but was very refreshing in the heat and the current was not strong near the river bank. 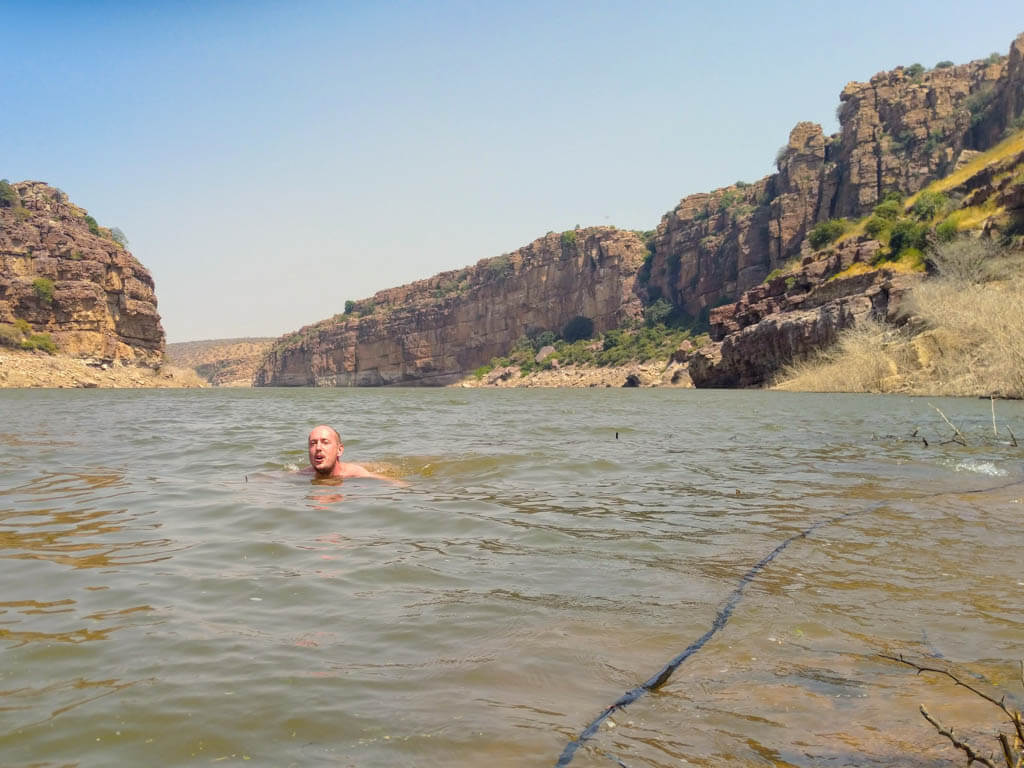 Taking a dip to cool off

We had lunch at the restaurant inside the Haritha Resort, the only hotel in the area, as it was the only restaurant open.  They had dosa, a staple in India, which was not bad. After lunch the heat became so extreme that we headed back to the temple and rested in the shade there on the cold stone floor.  We were both tired from the sleepless night on the bus, so we slept there until the sun became lower in the sky, then walked to the mosque to see the sunset. We climbed up on the roof of the mosque by the entrance, where its stepped structure made climbing easy.  It was nice, but the sun was setting at the other end of the complex, so we didn’t have the best view. The main entrance hall on which we were perched was connected to a building at the other end of the complex by the wide outer wall of the courtyard, about 3m high, so we clambered along it, picking our way carefully over the rough stone, until eventually we reached the building at the other end.  From there the view of the sunset over the nearby hills was truly spectacular. 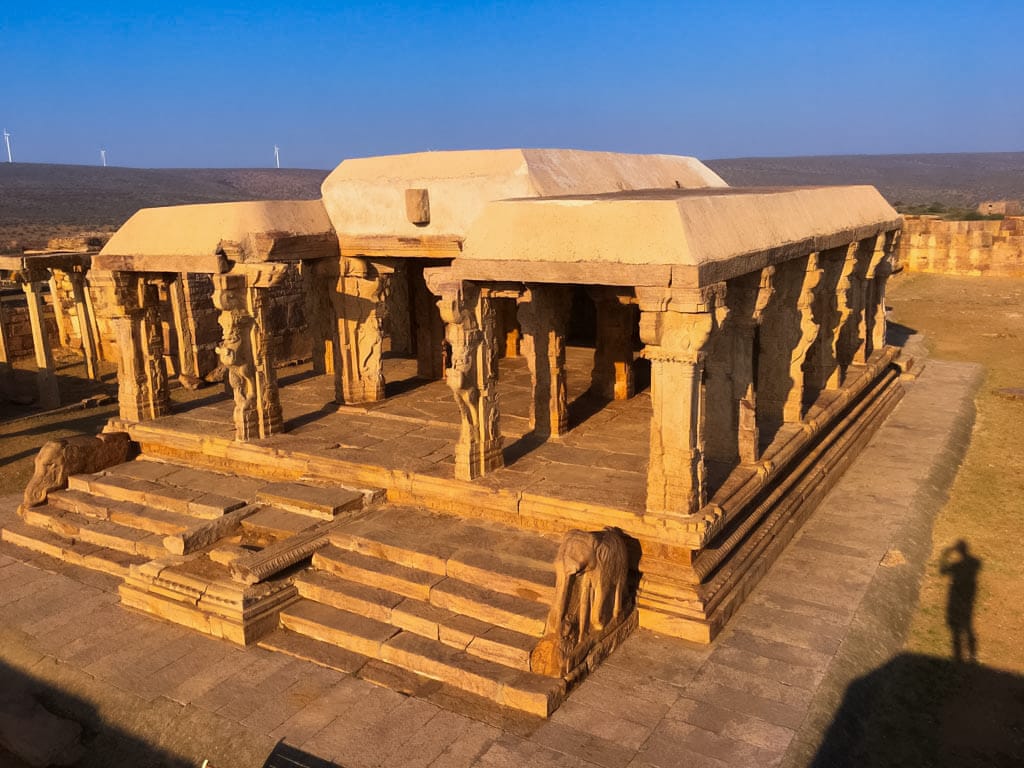 Gandikota temple where we rested during the midday heat 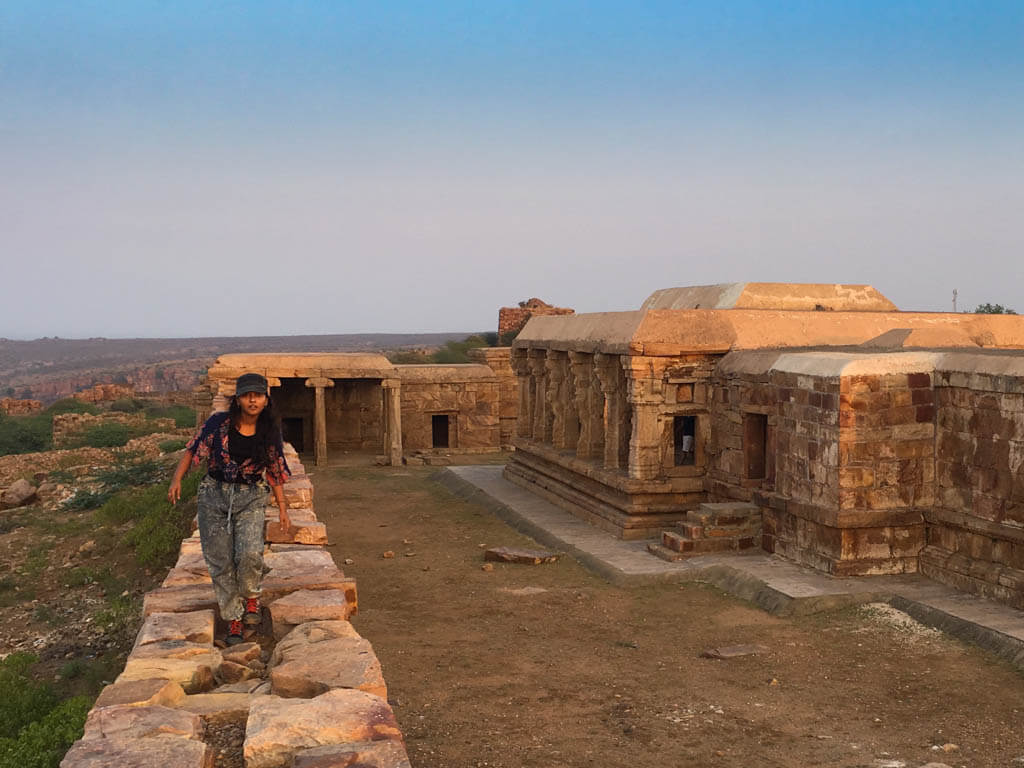 Priya climbing along the mosque wall to watch the sunset

After the sun had set, Kesava and his friend reappeared and I rode with him on the back of his motorbike to Jammalamadugu to buy some beers.  I clung on for dear life, painfully aware that I lacked a helmet, as the bike roared over the rough roads of rural India, but eventually we got back in one piece with a bag full of beer.

When we returned, there was a real party atmosphere.  Many Indian tourists had descended on the campsite during the day and tents sprouted like mushrooms above the gorge.  Music blared and groups of friends laughed, drank and chatted well into the night. We chatted about our lives, travels and Couchsurfing experiences, listened to music, drank the beers and ate at a makeshift food stand some entrepreneurial young Indians had set up nearby until late into the night.

The following morning we got up early and realised that it was possible to climb up onto the fort buildings to explore the inside of the towers and walk the city walls.  While Kesava and Priya hung out on one of the towers, I walked most of the length of the front wall, climbing over crumbling bricks and through ancient archways behind the battlements while the thorns of invading shrubs that had found a foothold in the decaying masonry clawed at my arms and legs.  It was mercifully cool at that time and the view over the ancient village was beautiful in the morning light. I watched the locals going about their daily business, tending their crops and animals. The walls were a bit of a scramble and I had a few cuts afterwards, but it was not dangerous. 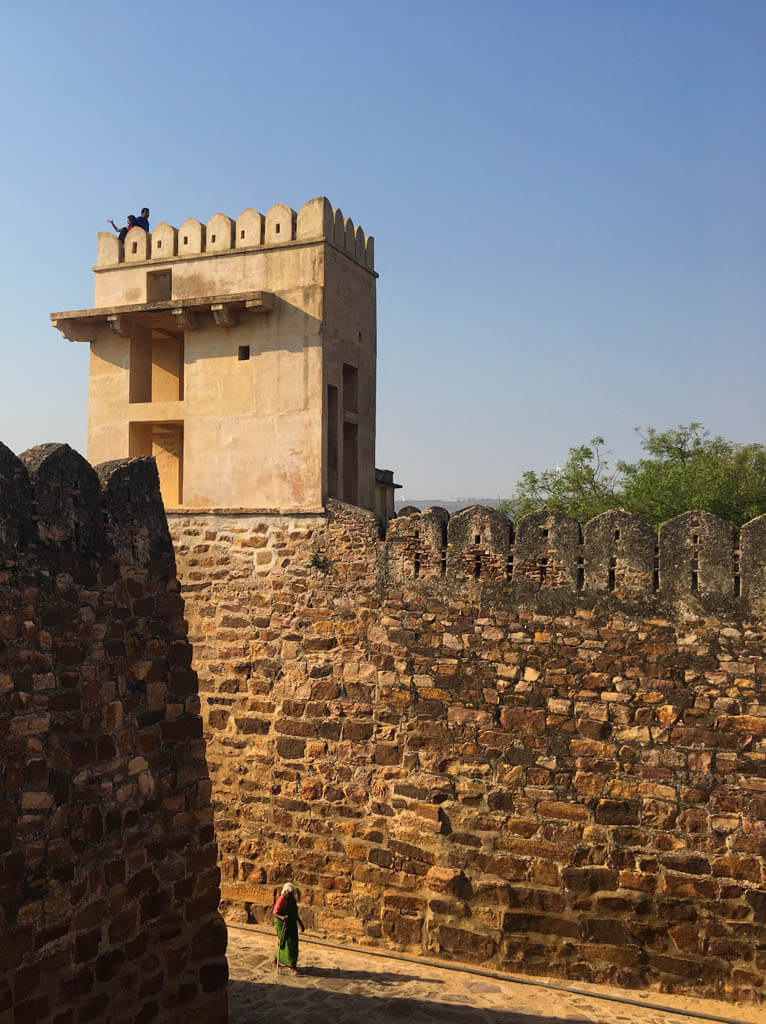 Priya and Kesava look on as a local women walks below 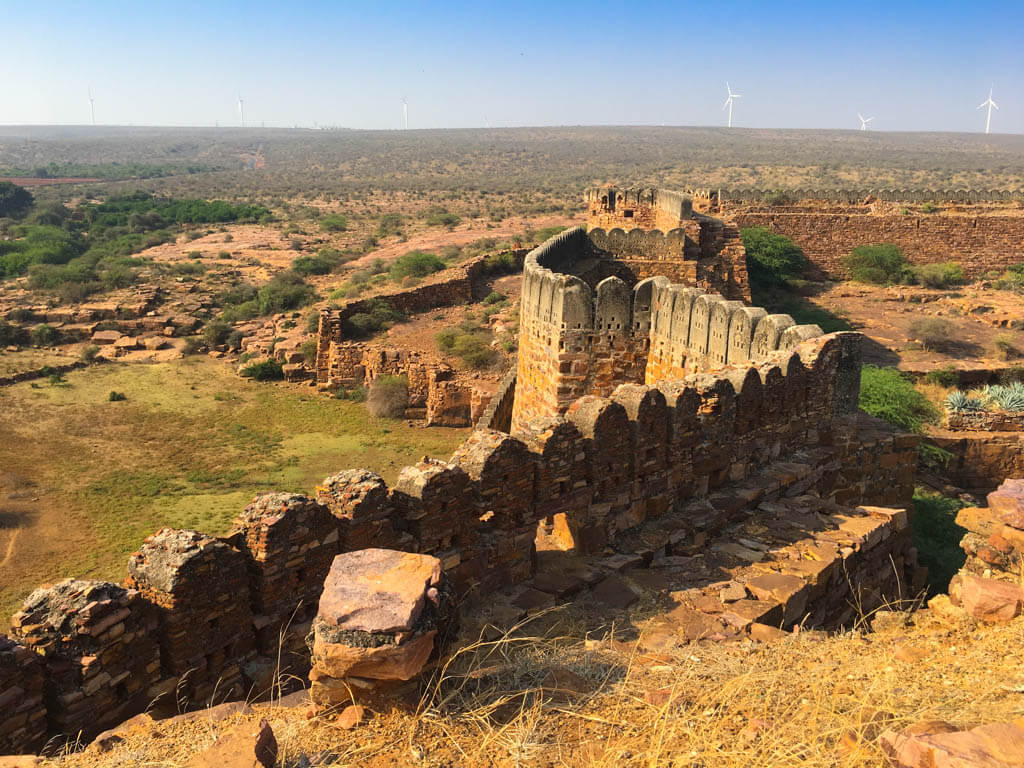 After Gandikota, we had decided to visit the nearby Belum Caves, the largest cave system open to the public on the Indian subcontinent.  Kesava told us that the bus back to Jammalamadugu would arrive somewhere within a two-hour window, so we said our goodbyes to beautiful Gandikota fort and had breakfast (dosa again, but this time with egg, so I guess it was a breakfast dosa) in a little shack by the edge of the main road while we waited.  You can read about our adventure exploring the Belum Caves here.

Gandikota and the nearby Belum Caves were one of the highlights of my India trip and definitely one of the more authentic parts of the country that I have visited.  The area has everything – beautiful natural scenery, friendly locals, ancient architecture and a huge cave complex to explore to boot. One day is really enough for Gandikota, but combining it with the Belum Caves makes for a perfect two-day weekend itinerary.  The area is very accessible by public transport, although it could definitely be done more comfortably with a car or bike.